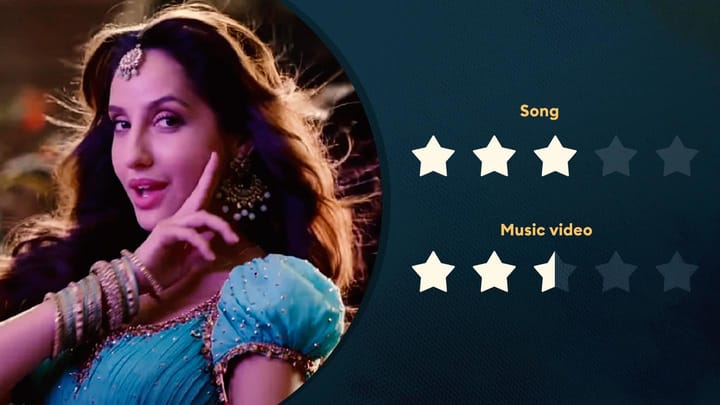 Makers dropped the latest song Zaalima Coca Cola from the war movie Bhuj: The Pride of India today. Featuring Nora Fatehi, who plays a major character in the period film, the song has been voiced by Shreya Ghoshal. Composed by Tanishk Bagchi, Vayu has penned the lyrics of the upbeat track. Despite all correct raw materials, the cooked product feels off. Here's our review.

The opening of the song resembles the male adlibs heard in the recently released dance track Param Sundari (Mimi), also sung by Ghoshal. The music will remind you of dance numbers from the 2000s and 2010s, a trend seen in some recent romantic songs, like Dil Lauta Do and Barsaat Ki Dhun, as well. Ghoshal's voice drips honey, but the lyrics lack depth.

Fatehi brilliantly aces the moves but clip offers nothing new

Now coming to the visual aspect, we all know Fatehi is a great dancer and she does not disappoint on that account. Armed with an innovative hook step by Ganesh Acharya, she tries her best but the song is just another "item song" from Bollywood. The actress mock runs away from a group of men, changes costumes in every verse and the end.

Song was previously scheduled to drop on July 24

Notably, Fatehi has also started the "Zaalima Coca Cola hook step challenge" with Acharya and Govinda. The song is currently trending at number 10 under the Music category on YouTube and one can expect the song to take over social media in the coming days. Also, the track was originally scheduled to drop on July 24 but was delayed due to some technical glitch.

If you are a fan of Ghoshal or simply music, her sweet tone and harkatein will surely mesmerize you. However, she gets to work with mediocre music and sub-par lyrics. While watching the video, the steps seem misplaced and too fast-paced to suit the rhythm of the song. Bhuj will release on Disney+ Hotstar on August 13. Verdict: Song gets 3/5, music video 2.5/5.