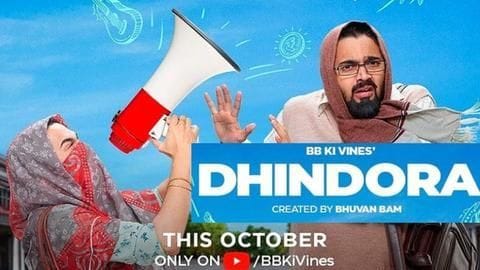 Popular YouTube star Bhuvan Bam just dropped the trailer for his upcoming series Dhindora. Featuring various BB Ki Vines characters (all played by Bam) and some known faces from the Indian comic circle, the show looks really fun and chaotic. At the center is a middle-class family, a lottery win, slights at TikTok and YouTube, along with a talented Bam. Here's a trailer breakdown.

'Can't wait to hear what you guys think,' wrote Bam

#DhindoraTrailer OUT NOW - https://t.co/Eh5gt5Rm1f
Can’t wait to hear what you guys think ❤️

A middle-class family wins multi-crore lottery and loses it

The 2:08-minute-long trailer opens with known characters from Bam's YouTube Channel BB Ki Vines universe. The family seems to be struggling financially when the father suddenly wins a multi-crore lottery. As the opening line says, "It's a habit of the middle-class people to live the dreams before they have been fulfilled," the family beat their own drums over their lottery win.

Tune into Bam's YouTube Channel on October 14 to watch!

Now, how do they deal with the sudden wealth, and how does this sudden change affect their situations will be better understood when the web series premieres on YouTube on October 14. As per the description, Bam has played nine characters in the show, alongside writing the story and dialogues, creating the characters, and working on the background score and the three tracks.

'Playing multiple characters at same time was challenging yet thrilling'

Speaking to a portal, Bam had shared that he was conceptualizing the show since 2017. Revealing he had to prepare differently for all the nine characters he plays, the 27-year-old said, "Playing multiple characters at the same time was especially challenging yet thrilling." The content creator, who is a multi-faceted artist, announced the arrival of the project a few days ago.

The project garnered nods from SS Rajamouli himself!

We are not the only ones levying hopes on the project doing extremely well. After the show's arrival was announced, Baahubali director SS Rajamouli had himself congratulated Bam on Twitter. He had written: "Makes me so happy to see young talent bringing new ideas for audiences. Wishing him all the best for #Dhindora!!" Directed by Himank Gaur, it has been produced by Rohit Raj.

'Anek': This is when the Ayushmann Khurrana starrer will release

'The Batman' trailer: Robert Pattinson's darkest avatar against the Riddler