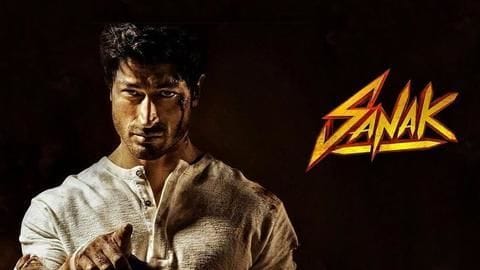 Ahead of the release of Sanak on Disney+ Hotstar, makers have dropped the trailer for the Vidyut Jammwal-led actioner today. The new generation action hero is back at saving his lady love in the new hostage action flick. Directed by Kanishk Varma, the film also stars Rukmini Maitra, Neha Dhupia, and Chandan Roy Sanyal in pivotal roles. Here's a dissection of the trailer.

Trailer
Jammwal's Vivan is the titular 'hope under siege'

The trailer opens with a mesmerizing shot of Jammwal's Vivan posing to fight and then we are taken back to comprehend the situation. Vivan's partner Anshika (Maitra) has a heart dysfunction that leads to her hospitalization. But during her stay, the hospital is taken hostage by a terrorist organization. Vivan will now single-handedly take down the bad guys, acting as the "hope under siege."

The leader of the terrorist group is played by Roy Sanyal, who acts like most movie terrorists, killing off innocent people without any conscience. Dhupia, who recently became a mother for the second time, plays an in-command police officer here. As per reports, the role of Vivan is an MMA trainer, possibly to better justify his capability of leading such a heroic mission.

The very first scene of a group of terrorists banding together to attack will remind you of the ghastly 26/11 attacks and the many shows and movies made on the same. The hospital environment especially finds similarities with the recently released Amazon Prime Video series Mumbai Diaries 26/11. We are hoping the upcoming project will be fresh with its treatment.

It is backed by filmmaker Vipul Amrutlal Shah and Zee Studios. Sanak marks the fifth collaboration between Shah and Jammwal after popular action movie series like Force and Commando. Zee Studios has presented the movie in association with Sunshine Pictures Pvt. Ltd. The film drops on Disney+ Hotstar Multiplex on October 15, the same platform where his last venture, Khuda Haafiz, had premiered.