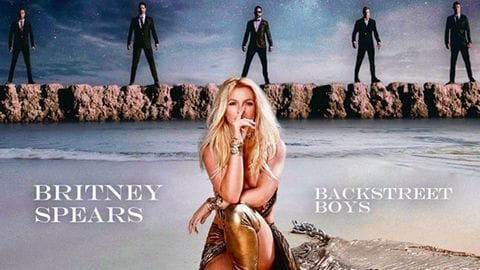 The Princess of Pop and BSB are back, and this time they are together! Britney Spears and Backstreet Boys have dropped their collaborative single, Matches, bringing all the nostalgia of the '90s era. A part of Spears' deluxe album, Glory (2016), this catchy and peppy song is almost three minutes long. Fans have termed it "the collab 2020 needed," and we couldn't agree more.

Spears took to social media to announce the release of the song "featuring her friends," while the veteran boy band said this collaboration was due "for the past 20 years." "I'm so excited to hear what you think about our song together," said the Oops!... I Did It Again crooner, adding that the love fans have showered upon her album "has been stupid amazing."

Reaction
'What a GLORIOUS day it is,' the band exclaims

Backstreet Boys, on their part, said, "What a GLORIOUS day it is... we've been asked about the possibility of a collab like this for the past 20 years and today is the day!!" Produced by Ian Kirkpatrick and Michael Wise, the song has been co-written with Justin Tranter and Asia Whiteacre, renowned songwriters associated with top music publishing company, Warner Chappell Music.

Spears
The singer's personal life has been under scanner since long

Spears has lately been in news for her personal life. She's embroiled in a legal battle with her father/co-conservator Jamie, who has control over her finances and assets since 2008, and she's "strongly opposed" to that. She had asked the court to remove him from the position, which was declined twice. Recently, a judge asked Jamie to stay as her conservator till February 2020.

Details
Last album of Backstreet Boys was released in 2019

The 27-year-old band, on the other hand, has comparatively been active in the music scene. They released their ninth studio album, titled DNA, in January last year. On the US Billboard 200, it grabbed the numero uno position. Their last album prior to this one was In a World Like This, a 2013 release, which debuted at number 5 on the US Billboard 200.