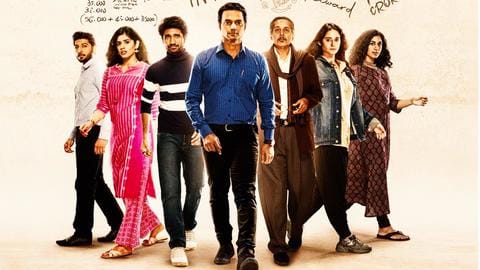 Teaser
'The only difference between reality and fantasy is a scam'

The teaser clip begins with a male voice enticing another person with the prospects of fulfilling his dreams and a case full of money. Then we get a look into six other "unusual scammers." The line: "The only difference between reality and fantasy is a scam," suggests these people will be feeding individuals stories to cheat them. Simple scamming stuff!

Although the clip doesn't give much away, we have an idea about the story from the description given by YouTube. So, two friends will gather the idea that the "good life is just one scam away," by reading and studying high-profile scam cases in the newspaper. To achieve this goal, they'll join forces with five others and open a fake bank to dupe people.

The Amazon Original Series will star Vicky Arora, Anuj Rampal, Swati Semwal, Mohan Agashe, Shishir Sharma, and Manish Chaudhari in lead roles. Given it is coming out ahead of Diwali, the show might enjoy the festive period craze. It is a good move to premiere it on November 3 as it won't head-on clash with Netflix's Meenakshi Sundareshwar releasing on November 5.

Before the web show, Kaushal had films like Shaadi Ka Laddoo and Pyaar Mein Kabhi Kabhi in his directorial resume. The 49-year-old passed away in June due to a heart attack. His sudden passing had left a gaping hole in the Hindi entertainment industry with many leaving supportive comments and posts in remembrance. Bedi had shared old pictures with Kaushal remembering him.