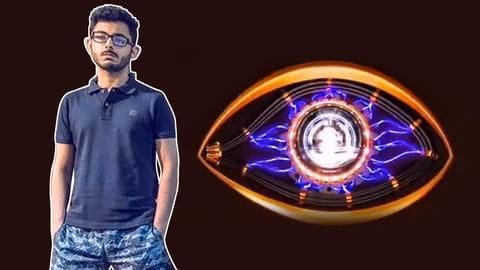 YouTuber Ajey Nagar aka CarryMinati dropped a new video recently, centering on Bigg Boss. In the video, Nagar roasted its host Salman Khan and several participants of the latest season. He also took apparent digs at Munawar Faruqui and Tanmay Bhat, albeit without naming them. It has since garnered over one crore views, and is currently trending at No. 1 on YouTube India.

Video
He gave his two cents on the reality show

First things first, the video titled The Land of Bigg Boss had an elaborate skit, and an animation part involving a demon at the beginning. Taking a few digs at himself and his critics, Nagar's video introduced us to an animated Khan, and his mad driving skills. Thereafter, every significant BB14 inmate was thrashed, primarily for entering the show in the first place.

Eijaz Khan was Nagar's first prey, and he lambasted him for strategizing at nights, and failing to show results in the actual games. Rahul Vaidya, Jaan Kumar Sanu, Jasmin Bhasin, Rakhi Sawant, and Rubina Dilaik were the other mentions. Soon, memes decorated the trending pages of Twitter and Facebook. At the time of writing, there were more than 15,000 tweets under the hashtag #CarryMinati.

My mom feels like I watch youtube all day But she Don't Know I'm Studying Maths😎#carryminati pic.twitter.com/7yTreV0sdb

One Twitter user appreciated Nagar's craft, and said that the video was "well written, well-executed, and every part had its own meaning." Several netizens praised the animation part and urged their favorite creator to add more animations into his upcoming videos. The scene where Nagar had dressed up as a teacher, to teach how Bigg Boss was a triangle, was an instant hit.

BB14 winner Dilaik was given a special mention in the video, where Nagar played several scenes, where she was yelling at the top of her voice (a common scenario in the Bigg Boss house). He also insinuated that all this shrieking helped her win the trophy. Her fans were naturally upset and disagreed, but such tweets were heavily outnumbered by the pro-CarryMinati brigade.