#NewsBytesReview: 'Dingiri Dingale' from 'Kurup' is a refreshing, retro track 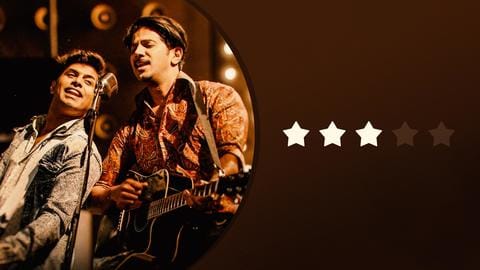 Makers of Dulquer Salmaan's upcoming flick, Kurup, have dropped the second song from the movie. Titled Dingiri Dingale, Salmaan has voiced the Malayalam version himself. The refreshing track takes you back to the bygone era with music and tune akin to those heard in movies from the black-and-white age. The song was accompanied by a lyrical video. Here's our review.

For the sake of comprehensibility, we will be reviewing the Hindi version of the song here. Crooned by Deepak Blue, the essence of the Malayalam track seems intact in this. However, the lyrics often don't make much sense (which could be a result of direct translation). Music composer Sulaiman Kakkodan has helmed the music for this fun, retro piece.

Of the five variants, Salmaan's Malayalam version was the best

As the Srinath Rajendran directorial is a multi-language release, producers have been sharing the songs as well as teasers in five languages—Malayalam, Tamil, Telugu, Hindi, Kannada. This trend was continued with Dingiri Dingale. But after listening to all the versions, the Malayalam variant touched me the most. Also, retro music lovers might want to listen to the original 1950s' Dingiri Dingale song after this.

The visuals match the energy of the track

Now coming to the video, we see Salmaan as Kurup playing the guitar in a band while performing this song in front of an audience. Given it is a lyrical video, makers hold back any important moments from the drama and instead share certain behind-the-scenes stills. The visuals on the screen match the energy of the fresh music and it is a cathartic feeling.

The second song from the crime thriller movie certainly stands at par with the first track, Pakaliravukal. Verdict: This happy and peppy song takes away 3/5 stars. Recently, makers had dropped its enigmatic trailer, thus further increasing anticipation of the production. We can't wait to watch the movie, inspired by the life of don Sukumara Kurup, take shape when Kurup releases on November 12.

Ahead of launch, India-specific OnePlus 9RT spotted on Geekbench

2022 SKODA KODIAQ sold out; bookings full till May

Burj Khalifa to play trailer of 'Kurup' on November 10

Is 'Alexander' name of 'Kurup' sequel? Report says no