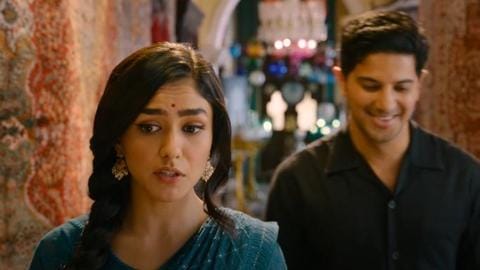 Flamboyant Dulquer Salmaan is here! Ahead of its premiere on August 5, makers of his upcoming multilingual venture Sita Ramam have dropped its highly awaited trailer on Monday. The clip was launched at a pre-release event in Hyderabad with Salmaan and other lead actors in attendance. The trailer was first premiered to a select few fans ahead of its launch.

Context
Why does this story matter?
Disappointment
Trailer available only in Telugu language

Billed as a multilingual project, it was expected that the makers would release the trailer in multiple languages. But disappointingly, only the Telugu version was released on Monday which does not have subtitles either. It is expected that the makers would soon release the trailer in all the other languages for non-Telugu-speaking fans to get a sneak peek of the film.

The 2:28-minute-long clip starts with Rashmika Mandanna trying to find out who Sita Lakshmi (Mrunal Thakur) is. And while in the process, she discovers a beautiful love story between the characters played by Salmaan and Thakur. The duo steals the show with their jaw-dropping chemistry. Their gestures and body language convey how head over heels in love they both are in with each other.

Details
We don't get cause of conflict, only lead pair's introduction

As in any romantic saga, their union won't be that easy as their love story is drenched in tragedy. But the trailer does not reveal the reason behind their conflict. Swapna Cinemas has bankrolled Sita Ramam which will be presented by Vyjayanthi Movies. Vishal Chandrasekhar has composed its music, with PS Vinod and Shreyaas Krishna cranking the camera. Kotagiri Venkateswara Rao is the editor.