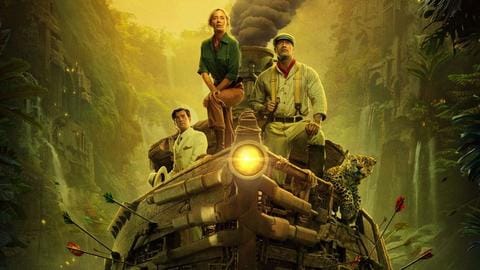 The second trailer of the highly-anticipated Jungle Cruise, starring Dwayne Johnson and Emily Blunt, dropped recently. The fantasy adventure movie shows the two stars in search of the Tree of Life. Johnson shared the the 2:30-minute-long trailer on social media, and fans are loving every second of their adventure-filled journey. They are now sure that The Rock and jungles are made for each other!

The poster has a very Indiana Jones meets The Pirates of the Caribbean vibe, as it shows the lead characters holding a lamplight, surrounded by spooky creatures in the darkness. There are many animals in the background, which adds to the real feel of the Amazon jungles. The trailer, on the other hand, reveals everything that one wouldn't want to encounter on an adventure.

There are sword-wielding skeletons, a tiger on the loose, and even a submarine torpedo. It also captures beautiful shots of their Amazon journey through thunderstorms, sea waves, and supernatural entities. It was refreshing to see a female lead take on the goons herself, in place of the cliche damsel-in-distress narrative. Notably, Jungle Cruise is inspired by the famous Disneyland ride of the same name.

Story
What is 'Jungle Cruise' all about?

The movie tells the story of a brother-sister duo played by Jack Whitehall and Blunt, who hire a boat captain (Johnson). Together, all three of them go through the Amazon river, as they look for a tree that possesses unparalleled healing powers. However, there are many twists and turns that await them on this journey, including goons, mysterious creatures, rough waters, and other obstacles.

Details
Here are the cast, release date, and other details

Apart from Whitehall, Blunt, and Johnson, the film also stars Edgar Ramirez, Jesse Plemons, and Paul Giamatti in important roles. Jaume Collet-Serra (of House of Wax, Orphan, and The Shallows fame) is the director of the movie. It's set for a theatrical release on July 30, and it's also coming to Disney+ Hotstar. Jungle Cruise is expected to release in theaters across India too.

Trivia
Did you know Tom Hanks was considered for this movie?

Jungle Cruise had been in development since 2006, with actors Tom Hanks and Tim Allen rumored to star in it. Wonder Woman director Patty Jenkins was once considered to direct the film. However, it didn't work out. This is Johnson's fifth jungle adventure movie. The others are The Rundown, Journey 2: The Mysterious Island, Jumanji: Welcome to the Jungle, and Jumanji: The Next Level.