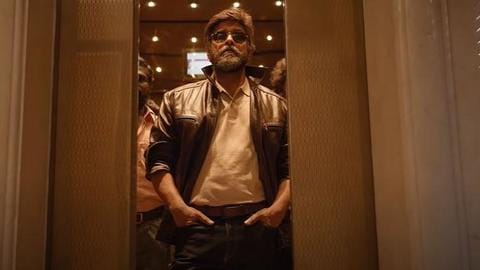 The teaser for "Chiyaan" Vikram and his son Dhruv's Mahaan is here! Going by the clip, shared by Amazon Prime Video on Monday, we can conclude that this gangster drama will be about Vikram's character who does exactly the opposite to what his family values stand for. For example, while his grandfather had protested toddy shops, Gandhi Mahaan (Vikram) runs an alcohol racket.

Context
Why does the story matter?
Observation
Man tells son about their family's legacy

The 2:08-minute-long teaser opens with a monochrome scene, where a group of people is seen protesting toddy shops. Next, we see a man telling his son aggressively that his grandfather had objected to alcohol alongside Mahatma Gandhi and asks if he will "fulfill the dream of our ancestors" and be "Gandhi Mahaan." We then see Vikram's entry and the clip becomes colored, too.

Observation
Vikram keeps you hooked throughout the teaser

Right from the time he enters the scene, the seasoned star captures every frame. When he is snorting drugs, drinking alcohol, laughing like a disoriented man, addressing his gang about how "only their booze will be served" to his fight scenes, Vikram arrests your attention throughout the teaser. And, we understand that Mahaan is a notorious gang leader, who has a taste for violence.

Dhruv appears toward the end. We first see his rear view and then his side face when someone, in a tensed voice, addresses him as "dada." This indicates the young actor might also be a don in the film. So, will the father and son come to a clash? This will get clear once this Karthik Subbaraj-directorial hits Amazon Prime Video on February 10.