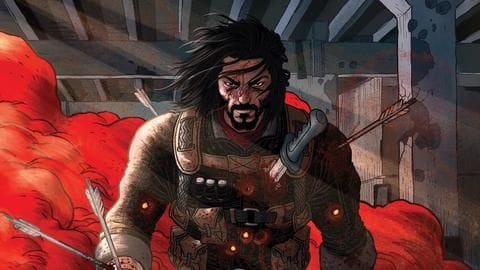 If you are done with all the controversies surrounding Keanu Reeves-starrer high-profile game Cyberpunk 2077, let us draw your attention toward the biggest project Reeves has been into other than cinema. He is creating and co-writing the BRZRKR comic book series with a robust team from Boom! Studios. He has now teased the specifics of the comic in a video recently uploaded by Boom!

Introducing 'B' - the protagonist

The official synopsis that Reeves shares in the video is about a mercenary named B, who has strong Viking origins and is half-mortal, half-God. Apart from the fact that this is one of the several popular re-imaginations of The Matrix star himself, the character has several inhuman combat edges and is hired by the United States government to fight battles that are "too violent."

B's existence is soaked in blood

Reeves further explains that B's existence coincides with violence, which is exactly what he wants to end. As per the comics, B's quest continues as in lieu of his involvement in fatal missions, he seeks a way to end his own "blood-soaked existence." Reeves and Boom! Studios have teamed up with writer Matt Kindt and artist Ron Garney to create this series.

Reeves says the story has action, romance, and great art

Promoting the title, Reeves said, "BRZRKR has got everything you want from a comic book. It has got great drawings, color, great story... It's got action, a little romance." He also participated in the recent New York Comic Con where he described how the storyline shows the US government as studying B instead of fulfilling its promise of giving him the desired closure.

At the virtual convention meet, Reeves revealed that they are aiming at releasing 12 issues of the comic. Reeves also thanked Kindt, color artist Bill Crabtree, letterer Clem Robins, and conceptual/cover artist Rafael Grampá as well as Boom! Studios for the opportunity. BRZRKR Volume #1 is reportedly set for release in September or October, this year.