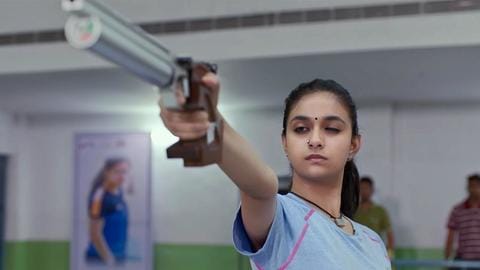 Ahead of its January 28 release in theaters, Good Luck Sakhi makers have dropped a trailer. The 1:33-minute-long clip features National Award-winner Keerthy Suresh in the titular character, along with Aadhi Pinisetty (male lead) and Jagapathi Babu in the role of her coach. Touted to be a sports drama, this movie marks Nagesh Kukunoor's Telugu directorial debut. And the trailer retains his signature style.

Context
Why does the story matter?
Details
Babu wants to train shooters, Suresh enters the scene

The clip starts with Babu who aspires to "train shooters who'd make the country proud." Enters Suresh, who is called Bad Luck Sakhi by her villagers since she brings ill fate to anyone/anything around her. Like, when she gets near a mirror, it gets smashed with a ball. After this scene, the following sequences show us the ups and downs of Sakhi's shooting career.

The best thing about the trailer is Suresh. She looks convincing as a village girl. Her attires suit the character pretty well. Even when she takes part in competitions, we see her wearing jersey, trackpant and a black bindi. This can be because rural girls usually dress up like that or because black bindi is believed to negate bad luck. What a detailed presentation!

Information
These are the other projects of the actor

Good Luck Sakhi will be released in Telugu, Tamil, and Malayalam. It's being backed by Sudheer Chandra Padiri, while Dil Raju is its presenter. Devi Sri Prasad has given its music. Apart from this film, Suresh has several interesting movies in pipeline, like Saani Kaayidham, directed by Arun Matheswaran, and Sarkaru Vaari Paata. Bhola Shankar, Vaashi, and Dasara complete her slate for now.