'Leave Before You Love Me' review: A potential party anthem 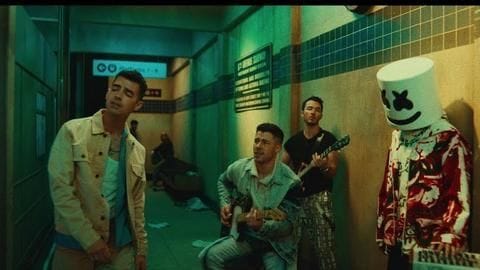 The video of Leave Before You Love Me is out now. The audio track, which marked the maiden collaboration between Jonas Brothers and American DJ Marshmello, dropped on May 21. Upon its release, it earned rave reviews from their fans, with many vowing to make it their next party anthem. And the video manages to live up to that hype. Here's our review.

In this article
Music

The music is fresh, energetic, lyrics have a meaning

The music combines the strengths of Joe, Nick and Kevin's efficient instrumental base and smooth vocals, with the added oomph from Marshmello's EDM beats. The final result is riveting and energetic. The lyrics are meaningful, and talk about fleeting encounters that young people have, but are too scared to let them blossom into something meaningful, lest they are left nursing some wounds.

The video is simple but gripping; conveys the energy

We first see the four performing at a subway intercut, with visuals of these fleeting unsaid goodbyes. After a brief solo by Joe on the street, we are back to a concert-like setting, matching the song's high energy. The director of the video, Christian Breslauer, has steered clear of bells and whistles, keeping the act clean and simple. The music takes center-stage here.

Jonas Brothers, Marshmello performed this single at the BBMAs

The trio, along with Marshmello, also performed the single at the recently held Billboard Music Awards (BBMAs). Nick was the host of the event that was held in LA at the Microsoft theater. He wore a daring green ensemble on the red carpet, walking alongside Priyanka Chopra, who wore a custom Dolce & Gabbana sheer nude dress. To note, she was also a presenter.

The Jonas Brothers are also embarking on a tour soon

Apart from this, the sibling trio recently announced their summer tour called Remember This. The tickets for the same will go live on May 27. Notably, the brothers had taken a hiatus from collaborating for a good six years, before coming together again in 2019, with their smash hit Sucker. Separately, Nick also had appeared as a coach on the reality show The Voice.

Tickets for the tour will 'go on sale May 27th'

Gonna feel so good to get back together and celebrate again. So ready to see you guys at the #RememberThisTour this summer!! #CitiPresale tickets are available now and all tickets go on sale May 27th! https://t.co/oO1hpzdzRf pic.twitter.com/FqklkuQ2xs