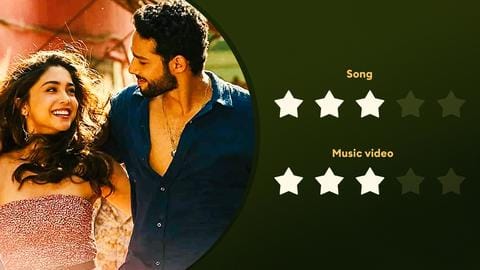 Yash Raj Films is gearing up to release one of their biggest movies in the cinema halls, Bunty Aur Babli 2, after a forced halt, courtesy the pandemic. Ahead of its approaching premiere, makers have dropped another song, titled Luv Ju. Picturized on our new Bunty-Babli pair of Siddhant Chaturvedi and Sharvari Wagh, the love ballad is peppy and light. Here's our review.

Song
Light and breezy, the track holds your attention

Crooned by Arijit Singh, the track is effortless as it glides through but the chorus will get stuck on your mind. The esteemed trio of Shankar-Ehsaan-Loy has given the music and the track has a distinct YRF feel to it. Amitabh Bhattacharya has penned the lyrics. We can totally see the track becoming the next internet sensation and current YouTube trends support that claim.

Video
Keeping it concise: Chaturvedi and Wagh are fire together!

Now coming to the visual aspect, Chaturvedi and debutante Wagh are fire together! They complement each other well and it creates the anticipation of seeing the fresh pair on celluloid. Also, as seen in the film's first track Tattoo Waaliye, both the youngsters are excellent dancers and the director of choreography Vaibhavi Merchant has totally put that to use here as well.

Information
Did you know Chaturvedi overcame hydrophobia to shoot underwater?

The Gully Boy star's acting skills were proved in his debut movie but his dedication was tested while shooting for Luv Ju. The song had an underwater sequence (which has been beautifully shot) but Chaturvedi is hydrophobic. The star eventually overcame his fear to excel in this test. Great strive indeed! The pair also learned salsa to deliver that brilliant performance in the song.

Verdict
Makers go safe with production but not stale

The best thing working for the team behind Luv Ju is that the sound is nothing too drastic from what we have heard in Hindi romantic songs but not mundane or repetitive either. Verdict: The song and video both get 3/5 stars. The movie will be dropping in the theaters on November 19. Before that, keep yourselves informed and interested by watching the trailer.