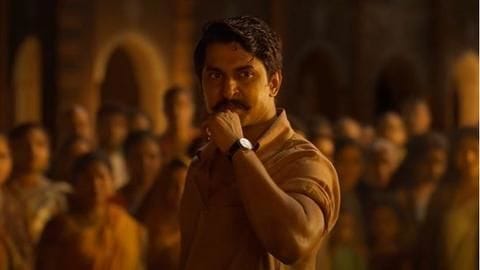 Natural Star Nani is back with a new release after Tuck Jagadish. Titled Shyam Singha Roy, the upcoming film will release in theaters on December 24, a day before Christmas. As a part of promotional activity, its makers shared a teaser recently. The 1:45-minute-long clip shows Nani's retro look, while the last few seconds have him from another timeline with Krithi Shetty.

Context
Why does it matter?
Story
Teaser shows Nani from two different periods of time

Directed by Rahul Sankrityan, Shyam Singha Roy will feature Nani from two different timelines. The teaser shows him fighting for the Devadasi women of Kolkata. It opens showing a group of women and girl children being treated as sex slaves in a home. Nani, who comes as the savior for them, packs a punch saying that women are slaves to no one.

Details
Sai Pallavi steals the show with her charm

Sai Pallavi's grace in retro look is a visual treat. The teaser shows her dancing along with the other women in a temple. Clad in a traditional red saree, the Virata Parvam actor flaunts a fierce look. The teaser ends with Nani having a romantic moment with Shetty. Apart from Telugu, Shyam Singha Roy will be released in languages like Tamil, Kannada, and Malayalam.

Updates
This film marks the second collaboration of Nani and Pallavi

The period drama is being bankrolled by Venkat Boyanapalli under Niharika Entertainment banner. Sanu John Varghese has cranked the camera, while Mickey J Meyer has composed the background scores and musical tracks for the flick. Madonna Sebastian will be seen playing a pivotal role in the anticipated project. This film marks the second collaboration of Nani and Pallavi after their Middle Class Abbayi.