Home / News / Entertainment News / 'Roar of RRR': Rajamouli's next will be bigger than 'Baahubali'

'Roar of RRR': Rajamouli's next will be bigger than 'Baahubali' 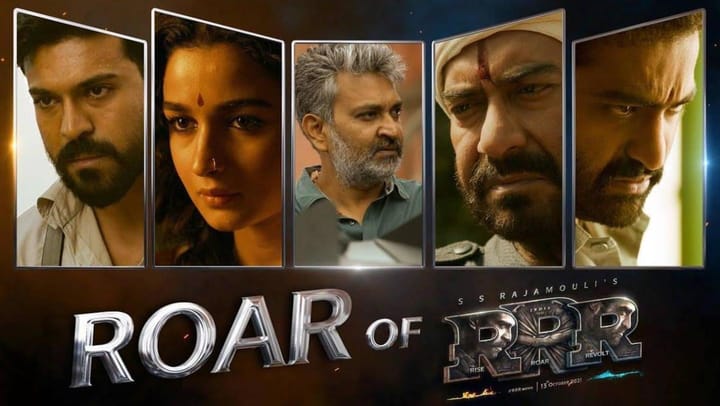 Renowned filmmaker SS Rajamouli on Thursday treated fans by sharing a making video of his upcoming movie, RRR. Titled Roar of RRR, the 108-second-long montage showed the director in action and movie sets that looked bigger than Baahubali. While the video depicts high-octane action sequences by Jr. NTR and Ram Charan, it also gave a sneak-peek of Alia Bhatt and Ajay Devgn.

Hollywood and British actors to star in the film

RRR (Roudram Ranam Rudhiram) is Rajamouli's highly-anticipated movie of this year. The behind-the-scenes clip indicates that the film has been made on a grand scale. Looks like Rajamouli wants to deliver a bigger blockbuster than his previous magnum opus. In the video, he is seen directing Hollywood actor Ray Stevenson, British actor Olivia Morris, and Irish actor Alison Doody.

Bhatt to be part of a Rs. 3cr song sequence

To note, Bhatt will play Sita in her debut Telugu film. Her Rs. 6 crore remuneration earlier created a buzz; reports claimed no other Telugu actress has ever been paid such a huge amount. Moreover, she is set to feature in a song made at a Rs. 3 crore budget in RRR. Bollywood Hungama reported this might be "the most expensive song-and-dance" ever made.

Talking about the song, a source told Bollywood Hungama, "Bigger than anything we saw in Sanjay Leela Bhansali's Devdas or Rajmouli's Baahubali. It will be shot in acres of sprawling land. The costumes themselves will cost close to a crore (Rs. 1cr)." It's unclear whether the song has been shot or not. However, last month, makers revealed the shooting of two songs is remaining.

'RRR' to be released in foreign languages too

While fans are eagerly waiting to see NTR, Charan, Devgn, and Bhatt on the big screen, RRR will also star Shriya Saran and Samuthirakani in pivotal roles. The epic drama will also have a digital release. On ZEE5, it will be released in four languages: Telugu, Tamil, Malayalam, and Kannada. And, on Netflix, it will stream in Hindi, Portuguese, Korean, Turkish, and Spanish.