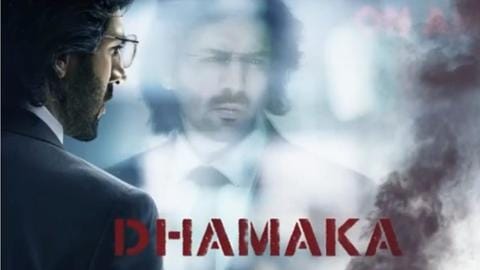 The teaser of Kartik Aaryan's Dhamaka released today and it is already impressing fans. The film directed by Ram Madhvani, who has helmed projects like Neerja and Aarya, has taken Aaryan away from his lover boy image and provided him with an opportunity to essay an edgy role. The release date of the movie is yet to be announced. Here's more.

The teaser showed Aaryan's character having a breakdown in the middle of the newsroom while reporting an intense piece of news. We can see him giving up and Amruta Subhash's character shouting at him to gather himself and do his job. The actor then recites his catchphrase of speaking nothing but the truth. He slowly regains his calm and looks into the camera.

Movie
The shoot for 'Dhamaka' wrapped up in just 10 days

In the film, Aaryan will be seen as Arjun Pathak, a prime-time news anchor. The movie grabbed attention when it was reported that the shooting was completed in just 10 days. Apart from Aaryan and Subhash, the film also stars Mrunal Thakur, Vikas Kumar, and Vishwajeet Pradhan in pivotal roles. The movie is produced by Ronnie Screwvala's RSVP and Ram Madhvani Films.

Actor's quote
It was an enriching experience for me: Aaryan

Talking about Dhamaka, Aaryan credited Madhvani for allowing him to "explore and showcase a new facet of his personality." He added, "Dhamaka has been a very exciting & enriching experience for me as an actor. (sic)" "I am thrilled that the film will reach audiences & my fans all around the world on Netflix," a statement from the actor read.

Talking about his lead actor, Madhvani said, "Every day Kartik Aaryan gave his all to the 360-degree system with which I work. His full involvement, his passion, his precise calibration as an actor is something that I hugely respect." The director, who is working with Aaryan for the first time, also expressed his intention to collaborate with him again soon.