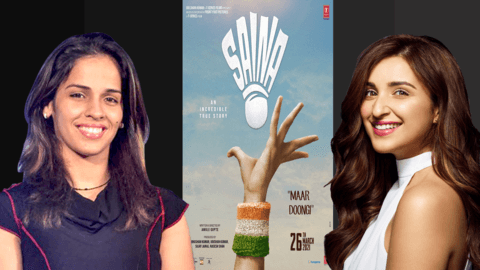 Parineeti Chopra's Saina, a biopic based on the life and struggles of star shuttler Saina Nehwal, will release on March 26. Today, the actress shared the film's poster, which showed a hand with a tri-color wrist band and a shuttlecock. The movie was earlier slated for an OTT release, but looks like the makers wanted viewers to have a big-screen experience.

Training
Chopra has undergone intense training for the role

Undoubtedly, it was not easy for Chopra to step into Nehwal's shoes. Speaking about her preparation, she told Bollywood Hungama, "I used to watch her matches, read everything, watch her interviews. I tried to emulate that in the film." In November, Nehwal had also praised Chopra's dedication. She had shared an image of Chopra calling the actress her "lookalike."

Looking back
Earlier, Shraddha Kapoor was roped in to play the role

To recall, actress Shraddha Kapoor was earlier signed up for the lead role; her pictures from training had also gone viral. However, since her pockets were already piled up with projects, she opted out of the film paving the path for Chopra. Kapoor had previously said she didn't regret losing out on the movie. Saina is directed by Amole Gupte.

Chopra was last seen in The Girl on the Train, an adaptation of Paula Hawkins's novel, that released on Netflix last weekend. On Monday, she shared a happy picture on Instagram, expressing gratitude for the reception the movie got. "The morning (weekend) after! Nightsuit and happiness .. Overwhelmed and emotional .. THANKYOU everyone. #TheGirlOnTheTrain, (sic)" she wrote.

Details
Bollywood has no dearth of sports movies