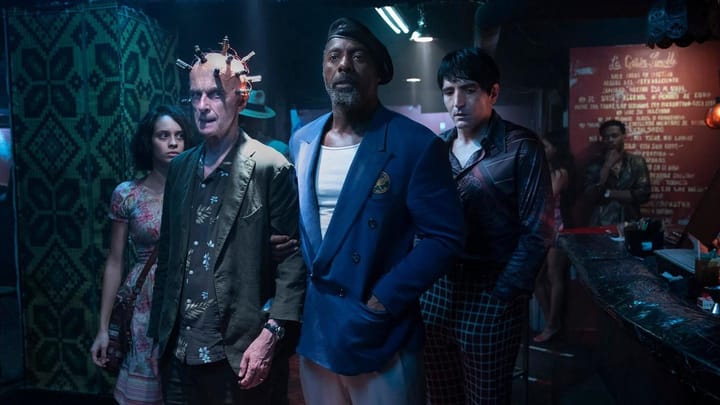 The baddies from the DC universe are coming sooner than you thought. Ace filmmaker James Gunn shared a new image from his upcoming The Suicide Squad, and it looks all kinds of awesome. The photo shows the characters played by Idris Elba (Bloodsport), Daniela Melchior (Ratcatcher 2), Peter Capaldi, and David Dastmalchian. The movie will hit theaters and HBO Max, simultaneously, on August 6.

The photo shows the supervillains at a nightclub, all worried

Gunn shared the photo on Instagram, saying, "Squad Undercover in Corto Maltese: Ratcatcher 2, The Thinker, Bloodsport, & Polka Dot Man in #TheSuicideSquad." It gives us a glimpse at the dashing supervillains, as they walk into a nightclub. They're also undercover as none of them are in their suits. The worried look on their faces is a sign that something terrible might happen.

What is 'The Suicide Squad' all about?

The film will focus on the story of a group of supervillains and criminals from Belle Reve prison. The government sends them to the secluded island of Corto Maltese, and they're now a part of the shady Task Force X. Their journey takes them through an enemy-infused jungle to "destroy a Nazi-era laboratory named Jotunheim, where political prisoners were held, and experimentations took place."

It boasts of stellar cast, the biggest names in Hollywood

Some facts about 'The Suicide Squad' you may not know

This makes Gunn the fourth director to helm both DC and Marvel films. The others are Stephen Norrington, Bryan Singer, and Joss Whedon. Dave Bautista was supposed to play Peacemaker. However, he opted to star in Zack Snyder's Army of the Dead. The cast features three Oscar winners - Waititi, Davis, and Capaldi, and two Academy Award nominees, namely, Robbie and Stallone.