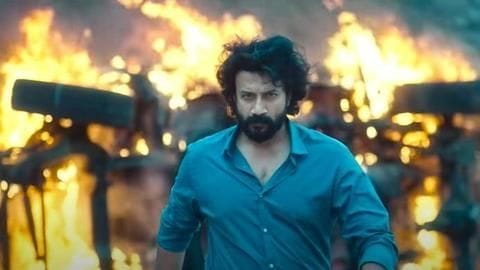 Teaser of upcoming Telugu film Godse is here and it was unveiled by none other than Tollywood megastar Chiranjeevi himself. Sharing the same, he wrote, "Wishing all the very best to dear @ActorSatyaDev @MeGopiganesh #CKalyan and the entire team of #Godse." In it, Satya Dev can be seen as a vigilante on a spree of killing corrupted people in power. The teaser is promising.

Context
Why does it matter?
Expectation
Lekshmi's role is expected to be substantial

Aishwarya Lekshmi will be seen playing a meaty role in the upcoming film. The teaser has her launching a hunt to nab the mastermind. In the 1:18-minute-long clip, she is seen saying, "I need to know what is happening here first. Only then I can handle him." This pretty much sums up what the film will be about, thus upping our expectations, too.

Toward the end, we see Dev being tied up with what looks like an explosive. He says thunderously how people in power are corrupt and questions how they can earn so much "for doing service?" "Because you are all looting public's money in the name of service," he declares in a fierce rage, shooting people, and then pointing the gun at the camera.

Details
All you need to know about 'Godse'

This film marks Malayalam star Lekshmi's debut in Tollywood. Produced by C Kalyan via CK Screens banner, this film will also feature Nassar, Sayaji Shinde, Kishore, Adithya Menon, and Brahmaji in pivotal roles. Written and directed by Pattabhi, the project has Sunil Kashyap as the music composer while Suresh S has cranked the camera. The makers have not yet announced the film's release date.