The banned pro-Khalistani group, Sikhs for Justice (SFJ), has announced a reward for unfurling the "Khalistani flag" on the Indian Parliament on February 1, when the Union Budget 2021-2022 will be presented. In a video statement, SFJ General Counsel Gurpatwant Singh Pannun hailed the insurrection at the Red Fort in Delhi on Tuesday, when India marked its 72nd Republic Day. Here are more details.

On Tuesday, farmers protesting against the Centre's new agricultural laws launched a tractor rally as permitted by the Delhi Police. However, violence ensued as the protesters broke police barricades before the agreed time for the rally and also changed the agreed route. Later, some protesters breached the Red Fort and unfurled 'Nishan Sahib,' a triangular saffron flag bearing the 'khanda' symbol sacred to Sikhs. 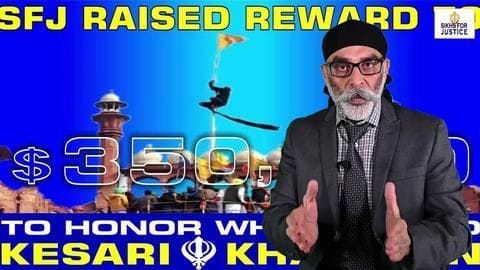 In a video statement, Pannun hailed the hoisting of the 'Nishan Sahib'—which he referred to as a "Khalistani flag"—during the "siege" of the Red Fort. He announced a reward of $350,000 (Rs. 2.5 crore) for unfurling the "Khalistani flag" at the Parliament on February 1. Last year, Pannun, who is based in the United States, was designated a terrorist by India.

Pannun also honored Navdeep Singh Hundal, a 26-year-old protester from Uttarakhand's Bajpur area who died during Tuesday's violence. Singh's friends say he was shot by the police, while the police say he died after his speeding tractor overturned near the ITO junction.

Recent news
Farmers to march toward Parliament on February 1

Incidentally, protesting farmer unions have announced plans to march toward the Indian Parliament on February 1 if their demands are not met. Earlier, the SFJ had announced a reward of $250,000 for hoisting the flag at India Gate. The National Investigation Agency (NIA) had last week summoned dozens of people for questioning in connection with a case registered against the SFJ last December.