Ahead of its launch in India, Volkswagen teases Taigun SUV 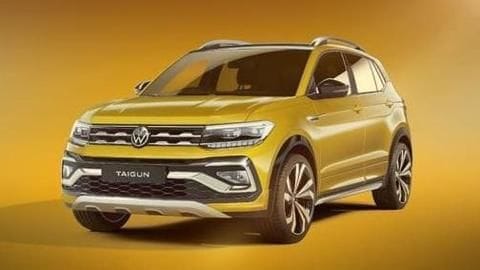 Ahead of its launch in India in early-2021, German automaker Volkswagen has teased the Taigun SUV on its social media handles. As for the highlights, it will have an eye-catching design and an upmarket cabin with a host of features. The car will draw power from a 1.5-liter TSI petrol engine mated to a 7-speed DSG gearbox. Here's our roundup.

Exteriors
Volkswagen Taigun: At a glance

Volkswagen Taigun will be based on the MQB A0 IN platform and shall feature a twin-slat vertical chrome grille flanked by large squared-off headlights, an aggressive bumper housing fog lamps, and a silvered skid plate. It will be surrounded by roof rails, ORVMs, and 17-inch diamond-cut alloy wheels. Connected LED taillights, window wiper, and a roof-mounted spoiler will be present on the rear side.

The Volkswagen Taigun will be powered by a 1.5-liter TSI petrol engine that should generate a maximum power of 148hp and a peak torque of 250Nm. Transmission duties should be taken care of by a manual and a 7-speed DSG gearbox.

Interiors
A peek inside the cabin

Volkswagen Taigun will get a 5-seater cabin with exterior body-colored inserts on the dashboard and door panels, leatherette seats, and a multifunctional flat-bottom power steering wheel. The vehicle will pack a digital instrument cluster, and a touchscreen infotainment console with support for Android Auto, and Apple CarPlay. To ensure the passengers' safety, multiple airbags, a parking camera, and ABS with EBD will be available.

The Volkswagen Taigun will make its way to India in early-2021 and is likely to sport a price-figure of around Rs. 10 lakh. Once launched, it will go against competitors such as Kia Seltos, MG Hector, and Hyundai Creta.