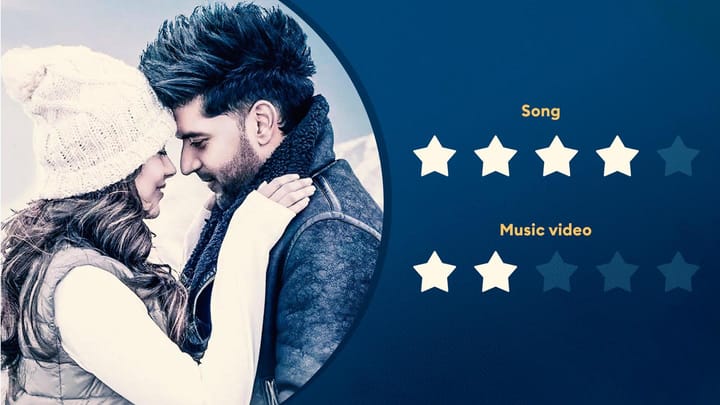 Popular singer Guru Randhawa has collaborated with Mrunal Thakur for the first time in his latest music video Aise Na Chhoro. T-Series dropped the song on all platforms today and the sad romantic track is a booming hit. The leading duo also looks good onscreen, despite an illogical plot backing them. Here's our review of the song and the music video.

Composed by Manan Bhardwaj, the famed lyricist duo Rashmi-Virag has penned the lyrics for the track. And on both accounts, we get great results. Randhawa's voice does justice to the yearning evident in the lyrics and the music has been well-crafted to go with the melancholy theme. The flavor of the song's dynamic progression gets mellowed because of the mess that unfolds onscreen.

Like other contemporary sad love songs by T-Series, this Ashish Panda-directed music video also seems to be about a lovelorn aashiq obsessing over an ex-girlfriend at the start. The girl obviously has no say as she's stuck in limbo between her lover and father (patriarchy!). But the story changes here later, sadly for the worse. Even inserting every possible love story trope doesn't help.

Randhawa should polish his acting chops a bit more

To the makers' credit and the sufficient studio budget, the pristine white hilly background looks nice in the clip and Randhawa-Thakur's chemistry is top-notch. But the Suit Suit crooner's acting remains sober only till he does not have to deliver dialogues. Given the Punjabi singer is preparing for his Bollywood debut soon, we suggest he should hone his acting skill further.

The crooner's "first-ever romantic sad number" hits the mark, and Shiddat-fame singer/composer Bhardwaj does a good job. "I really enjoyed working with Guru and it's a beautiful song, something which Guru's audience has never seen him sing before," Bhardwaj had said earlier. Verdict: The song is a refreshing number, getting 4/5 stars. Given the video doesn't make any sense, it gets 2 stars.