This is how Salman tackled spiteful tweets on Arbaaz's talk-show 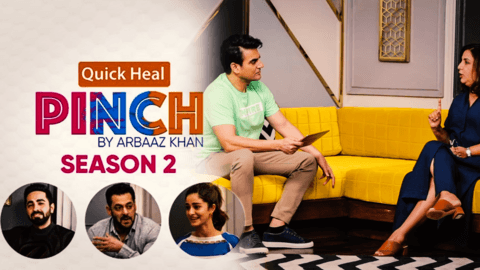 Arbaaz Khan is back with his talk show, Pinch. He dropped its trailer today that featured his elder brother Salman, who will be his first guest. Given his controversial image and the theme of the show, we can expect the 55-year-old to tackle numerous nasty tweets and tough questions. Other guests will be Farah Khan, Anil Kapoor, Ananya Panday, Farhan Akhtar, and Rajkummar Rao.

What did Salman reply to 'Janta ka bhagwan mat bano'?

In the 3.01-minute-long promo, we've Salman seated opposite Arbaaz, and the latter reading out a tweet addressed to him that says, "Janta ka bhagwan mat bano (Don't try to be god for the audience)." To it, the Dabangg star emphasizes, "Sahi baat hai, ek hi bhagwan hai, aur woh main nahi hoon (Absolutely true! There is only one God, and it is not me)."

When trolls got trolled by this bunch of celebrities

In the show, the prevalent topic of trolling was also discussed, where the celebrities, who face them the most, shared their feelings about the same. Like Anil said one shouldn't talk about something they have no knowledge about (tell that to your daughter, sir!), while Farhan highlighted that fans and trolls aren't same. Similarly, Rajkummar said how life was easier before social-media gained control.

Salman faced maximum mean tweets, one commented on his house

When it came to mean tweets, Salman faced the maximum scathing ones, at least that's what the promo showed. Apart from the aforementioned one, he was also rebuked for his house, which apparently looks like "aiyyashi ka adda (den of vice)." Replying to it, a bewildered Salman asked what did they see in his social media posts that gave them a feeling like this.

What did they see in my post, asks Salman

What Arbaaz had said about bringing Salman on his show

To recall, in 2019, when Arbaaz was set to host the first season of the show, he had told media that if this edition clicks, he would bring Salman as the first guest on his show the next time. "Let's see how the response is and if we feel confident, then yes, Salman Khan will be on it," he had said. So, wish granted!

Farah brought up topic of nepotism giving a silly example

When it came to others, Ananya said the nickname "struggling didi" was amusing, while reading out a tweet which said that she should be called "fake Panday." On nepotism, Farah gave a dumb example by saying that those who complain about this only want to "see Shah Rukh Khan's daughter's photos or Kareena Kapoor's son's picture." The show premiers on ZEE5 on July 21.