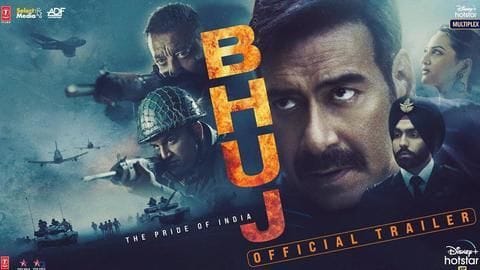 Ajay Devgn dropped the second trailer of his much-anticipated war movie, Bhuj: The Pride of India, on social media today. Director Abhishek Dudhaiya has shot the film on a huge scale, and the glimpse of that can be seen in the trailer, which is shorter than the first one. This film will premiere on August 13 (Independence week) on Disney+ Hotstar Multiplex.

Video begins with the Pakistani Air Force attacking Bhuj, with a voiceover instructing the assailants. He ends it by saying, "After that we'll share a cup of tea with Mrs. Gandhi in Delhi." In between the shots, three two-word phrases appear: "We rose. We sacrificed. We retaliated." While sharing it, Devgn wrote, "In the face of insurmountable odds, our heroes led us to victory."

Nora Fatehi's Heena Rehman was, however, missing from the trailer

The first trailer of the film, which released last month, had received positive response from fans and viewers. The second one also managed to impress, but some netizens found it to be "overdramatic" and having "cringe dialogues." However, most called it "outstanding" and an "all time blockbuster." One user remarked, "Looks like a Hollywood scale movie," while another wrote, "Perfect film for big screen."

The trailer's background score adds pace to the video

Based on the trailer and songs, the film does look promising. The second trailer's background score is one of the best tracks of this flick. It adds pace to the video. Others are Sanjay Dutt's feet-tapping number — Bhai Bhai — in which he nailed it with his expressions. Then, we had Fatehi's dance number Zaalima Coca Cola, and Devgn-Pranitha Subhash's love track, Hanjugam.

Auto
Bhuj: The Pride of India

Sonakshi Sinha, Huma collaborating for a film on body image

People should remember the sacrifices of unsung heroes: Ajay Devgn

OTT regulations are an area of concern, but important: Devgn

'Bhuj' review: This multi-starrer movie fails to soar, gets 1.5/5

'Rammo Rammo' review: Sonakshi nails it with her garba moves