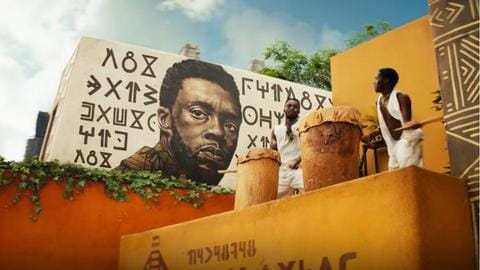 Marvel Cinematic Universe is having a sure-shot blast at the ongoing San Diego Comic-Con (SDCC). After a series of numerous exciting updates about its upcoming projects, the Hollywood biggie has released the official teaser of its upcoming film Black Panther: Wakanda Forever. The Ryan Coogler directorial will hit theaters on November 11, 2022, reportedly concluding Marvel's Phase 4, with Phase 5 beginning next February.

Context
Why does this story matter?
Trailer
Queen Ramonda stands out in the trailer

While the trailer, slightly over two minutes long, hasn't revealed much about who will take on the mantle of the titular Black Panther, we do hear Angela Bassett's (Queen Ramonda) powerful claim of being the "Queen of the most powerful nation in the world." The clip also zooms in on Shuri (Letitia Wright), who seems to be leading a funeral procession.

Quote
Gone, but not forgotten

At the SDCC event, Coogler fondly remembered Boseman and his momentous influence on the franchise and said, "The impact that he made on this industry will be felt forever." The clip, too, showed us a glimpse of Boseman, a bittersweet remembrance of an MCU great.

Details
Know more about the cast and crew

Black Panther: Wakanda Forever will be the 30th film in the ever-expanding MCU. Written by Coogler and Joe Robert Cole, it also stars Lupita Nyong'o, Martin Freeman, Danai Gurira, and Tenoch Huerta, among others. It is bankrolled by Marvel Studios' President Kevin Feige and Nate Moore (Black Panther, Eternals), while the cinematography has been helmed by Autumn Durald Arkapaw (Loki, Teen Spirit).

Upcoming titles
Other MCU titles to watch before 'Black Panther 2'

MCU's latest series Ms. Marvel, headlined by Iman Vellani, recently wrapped up on Disney+ Hotstar. Next, the animated series I Am Groot will premiere on the streamer on August 10 and will be followed by Tatiana Maslany-led She-Hulk on August 17. The Guardians of the Galaxy Holiday Special is also set to hit the platform in December 2022 and will feature the primary cast.