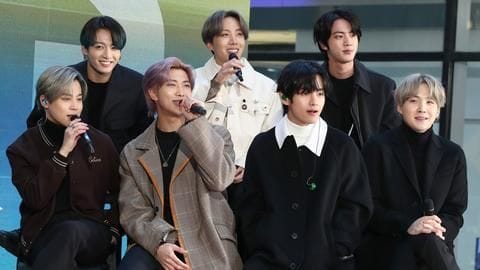 BTS Festa is on! In this annual event that lasts for some 10-14 days, the Korean boy band observe their debut anniversary. This year, it started on June 2, and every day the septet will be bringing real special stuff for their ARMY. Like today, they dropped a single by their leader RM titled Bicycle, which is already a hit with their followers.

The song produced, written and arranged by RM, along with John Eun, talks about his experience when he goes on a bike ride over his hometown during the COVID-19 pandemic. Upon its release, fans started commenting like, "Now I just wanna go on a bicycle ride while listening to this masterpiece forgetting everything worries me." "Everyone wants a leader like namjoon," wrote another.

Information
On Day 1, BTS shared a bunch of interesting photos

On the first day of Festa, BTS shared a bunch of photos titled 'Family portraits.' These actually had them recreating their old photos in new clothing, against new backgrounds. On June 4, the band shared choreography videos for the ARMY. As part of the festa, they released "Dynamite Dance Practice (Cute & Lovely version)," which has them practicing steps for the Grammy-nominated track.

The next day, another video was dropped titled Mission! BTS 4 Cuts. In it, we see the members giving each other tasks in a photo booth. The 34-minute-long clip garnered over 6.4mn views on YouTube. Notably, this grand saga will culminate on June 13 and 14, when the band will be hosting a virtual event on June 13 and 14 called BTS Muster SOWOOZOO.

Information
BTS made their debut with '2 Cool 4 Skool'

It's been eight years since the Korean septet made their debut. Since then, they have successfully evolved from a grunge boy band to a more diversified one. They also won four awards at the recently-held Billboard Music Awards. Further, BTS broke their own track Dynamite's record of number of views in 24 hours with Butter, thus establishing themselves as a promising band worldwide.