'Permission To Dance' review: Gives us hope for post-pandemic world 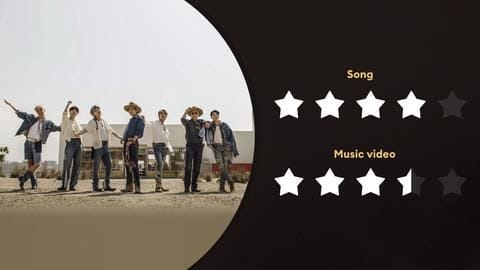 Popular Korean band, BTS is back with their latest single, Permission To Dance. The song is catchy, but its music video has caught more attention, because it shows how life would be post the COVID-19 pandemic. As the world is healing, the global sensation, dressed as cowboys, shows us some dance moves. The song was released to mark BTS ARMY Day. Here's our review.

Observation
In this video, purple balloons stand as symbol of freedom

The video begins with a waitress, wearing a mask, slowly looking outside the window, when a purple balloon is set free. In the entire music video, the same colored balloons are flying high in the sky, representing freedom from the contagious coronavirus. In the end, hundreds of balloons flock the sky. That's when people remove their masks, and break into their happy dance.

Lyrics
Lyrics encourage to break free and tap your feet

"'Cause when we fall we know how to land. Don't need to talk the talk, just walk the walk tonight, 'Cause we don't need permission to dance." While it says to break free and dance, it also hints that if the world faces another pandemic, it knows how to deal with it. Co-written by Ed Sheeran, the entire song's lyrics are beautiful and meaningful.

Fact
Who are the others who co-wrote 'Permission to Dance'?

Information
'Permission To Dance' is a part of 'Butter' CD single

It's reportedly the first Asian act to get this recognition. BTS also released their CD single Butter, alongside Permission To Dance, which is a part of it. The CD single includes both songs and their instrumental versions, Billboard reported. It added that the band will make their TV performance debut with this new song on The Tonight Show Starring Jimmy Fallon on July 13-14.