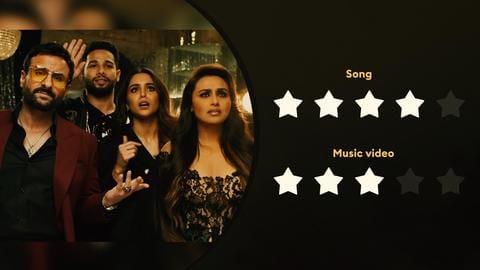 Gearing up for a November 19 release, Yash Raj Films just dropped the title track of Bunty Aur Babli 2. A rehashed version of the original title track from the 2005 movie, composer trio Shankar-Ehsaan-Loy (who had composed music for Bunty Aur Babli) does a commendable job with this one. We get some glimpses into the movie as well. Here's our review.

Song
The iconic introductory tune is back but in modernized avatar

Those who watched the original movie would remember the iconic tune associated with every act of con pulled by the Bunty-Babli pair. The same tune is retained here but with a slight twist. This way, the remake doesn't infuriate you but takes you on a nostalgic trip. Again, like the OG, here the lyrics describe the leads, readying us for what is in store.

Video
Visuals hint at shenanigans to be featured in the comedy

Siddharth Mahadevan has crooned the singing bits, written by Amitabh Bhattacharya; while BOHEMIA has penned and voiced the rap parts. On the screen, we first see the original Bunty-Babli pair (Saif Ali Khan-Rani Mukerji) getting ready to tackle impostors who are abusing their name for pulling misdeeds. Then, the new jodi (Siddhant Chaturvedi and Sharvari Wagh) shows up embodying full swag.

Quote
The original tune soul of both the films: Mukerji

"I think right from the moment YRF decided to make Bunty Aur Babli 2, they were sure that they would incorporate the title track from the original film even though our movie is completely rebooting the franchise," Mukerji, the only original cast member, said. "The original tune was the soul of the first film and it is the soul of the second too."

Overall, as a standalone production, the title track is pretty decent. Obviously, when comparisons are drawn, the fresh factor disappears. But it is quite enjoyable in comparison to usual Bollywood remakes. Verdict: The song bags a solid 4/5, while the MV gets 3/5. Also, since a romantic number revolving around Chaturvedi-Wagh has already been released, we believe a similar track featuring Khan-Mukerji is next.