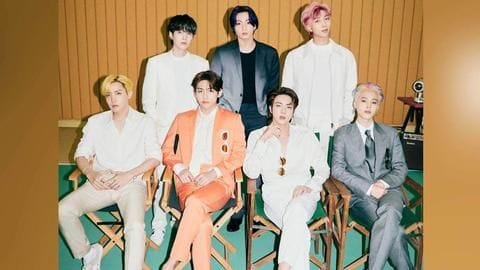 BTS released a new Bangtan Bomb recently! It is an unboxing of their new album, Butter, which includes the latest single, Permission To Dance. RM, Jin, Suga, J-Hope, Jimin, V, and Jungkook featured in the YouTube video where they shared many interesting anecdotes. In it, Suga also predicted their song, Permission To Dance will top the Billboard Hot 100 music chart, beating Butter.

BTS released the CD version on July 9 and now, they're seen opening the box with the Butter CD in it. It also includes "numerous photos, cards, and a pack of stickers" that can be used to decorate the hamper. Video shows the group is divided into two - Suga, J-Hope, V and Jimin in one, and RM, Jin and Jungkook in the other.

RM and Jin promised to host VLive together this month, while they also spoke about their beach-themed photoshoot, where the sun was extremely bright that made it difficult to keep their "eyes fully open." The other group talked about a photoshoot in cold weather, where Jimin was "freezing to death." J-Hope informed that these shoots were done in March before the songs were released.

Tracing back, BTS dropped their new single/MV, Permission To Dance, on Friday and within a few days, it has crossed 100mn views on YouTube, with one million likes. This isn't a big surprise as their previous tracks like Dynamite, Blood and Butter have also been successful. As mentioned, Suga is confident that this song will beat Butter on the Billboard music chart. Let's see!

Permission To Dance has been co-written by English singer Ed Sheeran in collaboration with Johnny McDaid, Steve Mac and Jenna Andrews. The Perfect crooner shared the track on his Instagram handle, where he mentioned that he has written it. Sheeran and BTS have earlier worked together on the song, Make It Right (Map of the Soul: Persona album), which was released in 2019.