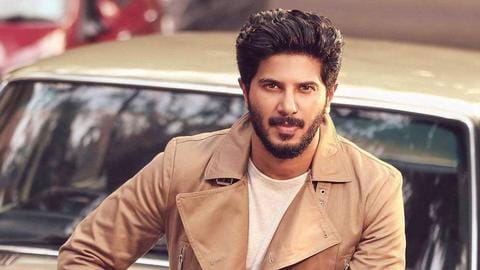 The teaser of psychological thriller Chup: Revenge of the Artist was unveiled on Saturday (July 9), on the occasion of legendary director-actor Guru Dutt's 97th birth anniversary. The film, which is "an ode to the sensitive artiste," was announced on October 10 last year, on Dutt's death anniversary. The film stars Dulquer Salmaan, Sunny Deol, Shreya Dhanwanthary, and Pooja Bhatt. Here's a teaser breakdown.

Context
Why does this story matter?
Teaser
Salmaan is a jilted lover; teaser promises slow-burn suspense

The 37-second-long teaser is marinated in slow-burn suspense, as we meet Salmaan—a jilted lover—humming Happy Birthday manically while preparing paper flowers. The teaser changes tracks as soon as he gifts the flowers to his "lover" and her displeasure is accompanied by a chilling slasher sound. The teaser has left us intrigued about Deol's role the most, who disappears in the blink of an eye!

What also caught our eye was the backdrop behind Salmaan which resembled a florist's shop with numerous bouquets stacked next to each other. Does this mean he ordered all of them as a gift for her? What is he up to? The teaser's retro vibe is heightened by Geeta Dutt's Waqt Ne Kiya Kya Haseen Sitam from Kaagaz Ke Phool playing toward the end.

The brief yet impressive teaser has received overwhelmingly positive reactions, with #DulquerSalmaan and #SunnyDeol dominating Twitter trends. While some netizens said that the teaser left them yearning for more, others expressed excitement about Salmaan's gray character. An elated fan tweeted, "#DulquerSalmaan sounds so creepy, I am way too excited," while another wrote, "I know he will kill it." We can't wait to see him!

Information
Everything we know about 'Chup' so far

Chup: Revenge of the Artist has been co-written by Raja Sen (Go Goa Gone) and Rishi Virmani (Singh Is King). It's bankrolled by Hope Productions, which is helmed by Balki and his director wife Gauri Shinde. Salmaan had called it an "experimental" film in an old interview, emphasizing that it will certainly raise audiences' intrigue. The release date is yet to be announced.