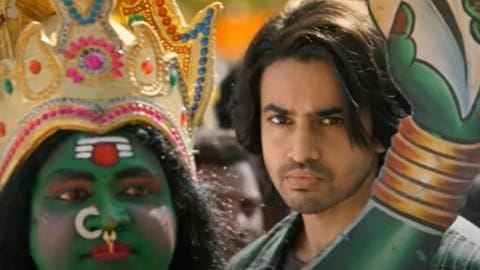 The trailer of Ashok Galla and Nidhhi Agerwal's upcoming Telugu film Hero has hit the internet. Genius filmmaker SS Rajamouli launched the trailer first. Sriram Adittya, of Bhale Manchi Roju and Shamantakamani fame, has directed the project. Going by trailer, it looks like Galla will be seen as someone who is venturing into the film industry. But it doesn't reveal anything more than that.

Coming back to the 1:45-minute-long trailer, Galla is seen as an aspiring actor, whose dreams are supported by his entire family. He works hard day and night to become a star. The clip also shows several antagonists, but we don't know yet who will be the main one. There are portions in the trailer that indicate the film will appeal to the family crowd.

We could not help but notice the high production value that has gone into making the film. A lot of known faces like Vennela Kishore, Jagapathi Babu, Naresh, Brahmaji, and Sathya also pop up in the clip. Agerwal will be seen as the leading lady in the upcoming film. Hero is set to be released on January 15 as a Sankranti special.

'Hero' to lock horns with two other Tollywood flicks

Meanwhile, two films namely Rowdy Boys and Bangarraju are releasing on January 14. So, it will be a tough fight for Hero. Bangarraju, directed by Kalyan Krishna, stars Nagarjuna Akkineni, Naga Chaitanya, Krithi Shetty, and Ramya Krishnan in lead roles. Meanwhile, Rowdy Boys, which introduces producer Dil Raju's nephew Ashish, has been directed by Harsha Konuganti. It has Anupama Parameswaran as the leading lady.

No evidence to suggest healthy children need booster doses: WHO

Priyamani's poster from her Telugu OTT debut 'Bhamakalapam' is fun

Why do I have a love-hate relationship with 'Ala Vaikunthapurramuloo'?

'Bangarraju' gets a fun-filled trailer; Nagarjuna, Naga Chaitanya charm you

Will start thinking about Mahesh Babu's project after 'RRR': Rajamouli

'RRR' trailer: Thank you Rajamouli, the wait was worth it