'Jann Gann Mann' review: A lyrical tribute to our motherland 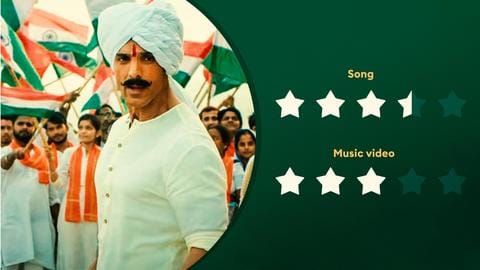 John Abraham is gearing up to greet us with his action drama Satyameva Jayate 2 this month. Furthering the hype of the film, makers have now launched yet another song. Titled Jann Gann Mann, the patriotic track has been picturized on Abraham as the father of the two leads, also Abraham. The actor is playing all three roles in the movie. Here's our review.

B Praak and Arko take the track to another dimension

B Praak has delivered some great patriotic songs and he shows why he is a top choice with Jann Gann Mann. Longer than typical three-minute songs, this melodious number is emotionally charged and uses the motto of the film—"Tann, mann, dhann se badhkar jann, gann, mann." Manoj Muntashir's lyrics are touching. Arko does a great job of composing the track and singing it.

It is an ode to Satya-Jay's noble father

As understood from the trailer, Abraham is essaying brothers—Satya and Jay—as well as their father in the film. While the previously released songs featured the sons, this one is an ode to the father, who was a revolutionary farmer. We get an insight into his character as well as the brothers' mother here. The video loses its impact when seen separated from the film.

Won't suit if one isn't into Bollywood's vision of patriotism

Also, like Bollywood's mainstream vision of patriotic products, this song also has too many flag hoistings and overtly simplistic portrayals of the oppressors and the oppressed. So, if such a depiction is not your cup of tea, this song might not suit you. To appreciate the lyrical beauty of the production, we would suggest you ditch the visuals and only concentrate on the audio.

Clip can be skipped, catch track on music streaming apps

The clip can be skipped, catch the song on music streaming applications. Verdict: The melodious song gets 3.5, while the music video scores 3/5. Satyameva Jayate 2 is hitting the cinema halls on November 25, a day before another action entertainer, Salman Khan-starrer Antim: The Final Truth, is getting released. Featuring Khan as a Sikh police officer, the movie will also star Aayush Sharma.

John Abraham, wife Priya down with COVID-19; in home isolation

'Kusu Kusu' review: Nora Fatehi is the only savior here