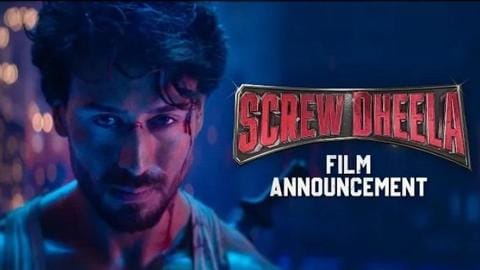 Tiger Shroff performing volatile action, smashing skulls, and wreaking havoc on his nemeses? Sign us up! On Monday, Karan Johar unveiled the teaser of Screw Dheela, fronted by Shroff and helmed by Shashank Khaitan. The teaser has laid the foundation for what we can expect from this slick actioner. The film is expected to hit theaters next year, though confirmation is still awaited.

Context
Why does this story matter?
Teaser
An ordinary teacher metamorphoses into a dauntless action hero

The almost three-minute-long teaser begins with an apparent case of mistaken identity when we see Akhilesh (Shroff), a supposed PT teacher held captive by malevolent goons. As if on cue, his real self springs to life when he sees the silhouette of his lady love (reportedly Rashmika Mandanna), kidnapped by his rivals. What subsequently follows is his mission to crumble his foes to dust.

Observations
Background score, along with action sequences, stands out

Screw Dheela gives Shroff yet another opportunity to do what he does best: high-octane action and Physics-defying stunts in rapid succession. We also see him take on multiple bad guys in one go—all while blood sprouts from his temple! The breaking of bones, cracking of window panes, and blazing of guns, married with a catchy background score further lend the teaser a "slam-bang" feel.

Concern
Hopefully 'Screw Dheela' won't be yet another substance-less story

While action films usually stand the test of time and amass a loyal fan-following, more often than not, they also skate on thin ice due to all show and no story. A recent example is The Gray Man, which has received mixed reviews and has been termed a "mindless actioner," barely held together by a string. Hopefully, Screw Dheela won't repeat the same mistake.

Shroff is currently busy with Vikas Bahl's Ganapath, where he will be seen opposite his Heropanti co-actor Kriti Sanon. Amitabh Bachchan will also have a cameo in the movie. Apart from that, he also has Chote Miyan Bade Miyan in the pipeline, to be directed by Ali Abbas Zafar (Tiger Zinda Hai, Mere Brother Ki Dulhan). The film also stars Akshay Kumar.