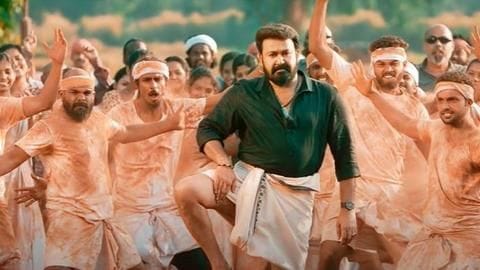 The makers of Mohanlal's upcoming Malayalam film Aaraattu released its trailer on Friday. The trailer, featuring Mohanlal as Ganabhushanam Neyyattinkara Gopan, promises an action-filled comedy-drama. It also suggests that the characters of Shraddha Srinath and Mohanlal will be rivals. B Unnikrishnan has directed the film that has been scripted by Udayakrishna, while Rahul Raj has taken care of the music and background score.

Context
Why does this story matter?
Observation
Mohanlal's massy avatar in trailer amps up our excitement

What we see in the 2:35-minute-long trailer is a ruthless Lalettan taking down a gang single-handedly. His massy avatar oozes swag as usual. His introduction comes with a voiceover: "I am not a gangster, I am not a monster, I am sinister." The trailer then shows high-octane action sequences and a few witty dialogues of the megastar. Mohanlal's punchlines in Telugu take the cake.

Speculation
Will there be a change in the release date?

Meanwhile, it was announced earlier that Aaraattu is set to be released on February 10. However, some reports suggest the makers may decide to postpone the release. The makers have not made any official confirmation about the postponement. But the trailer ended with a note, "Soon in theaters," without mentioning a date, hinting that there might be a change in the release date.

If there is no change in Aaraattu's release date, the film will have a slight clash at the box office with Mammootty's gangster flick Bheeshma Parvam. The Mammootty starrer would release on February 24, two weeks after Aaraattu. If the release dates remain the same, there will be two back-to-back releases from two megastars in Mollywood, which is pretty huge.