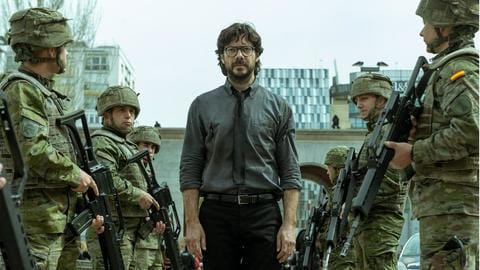 The end to "the world's greatest heist" is approaching. This is true at least for Netflix-verse as the trailer for the second volume of Money Heist (La Casa De Papel in Spanish) season five was finally dropped recently. Picking up from where Vol. 1 ended, fans will be bittersweet about bidding adieu to their favorite characters via Vol.2. Read on for a spoiler-free breakdown.

Context
This was the setting of the first volume

At the start of S05, we saw the Professor (Álvaro Morte) being held by Alicia Sierra (Najwa Nimri) because of which the gang has to conduct the heist at the Bank of Spain unsupervised. To make matters worse, the heist had turned into a full-blown war between the gang and the government with soldiers arriving at the bank. Things only went downhill from here.

While the previous semi-installment saw great action and emotional moments, the task at hand now is for the team to successfully escape the bank. Interestingly, we see the Professor entering the bank that has been completely surrounded by the army. Maybe he has been brought in to lure his team outside. But the man is guilt-ridden because of the lives that were lost.

Moments
Even if our favorite anti-heroes go down, it'll be classy

Inside, the team is broken and hurting as they strive to get out of there, scot-free. Palermo (Rodrigo de la Serna) says: "I really doubt we're gonna get out of here," signifying how broken they are. But the fight continues with the soldiers breaking in and slowly taking over the area. Makers guarantee, even if our anti-heroes go down, they'll do so in style.

The world's greatest heist comes to an end on December 3

Information
The second half of final season drops on December 3

Created by Álex Pina, the show's final season has been written by a team led by Javier Gómez Santander. The second part of the finale will premiere on Netflix on December 3, exactly three months after the first part aired. In case you were waiting to watch the entire season together, now is your time. Let the wait for a grand goodbye begin!