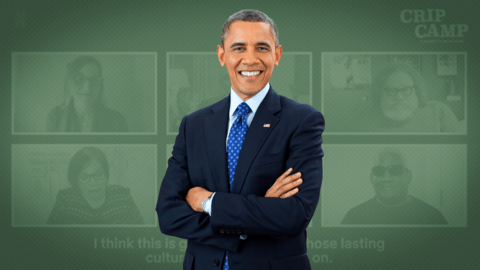 The Academy Awards aka Oscars are touted as Hollywood's and the world's most prestigious film awards. Lately, many political heavy hitters like the Obamas and the Clintons are being seen "lobbying" the 586-member-strong branch of the Academy's documentary section. That's because a documentary featuring Barack Obama and another two having connections to the Clintons have made it to the Oscar shortlist this year.

Higher Ground
From politics to entertainment, Obamas are doing it all

Barack, along with his wife Michelle, has a production house called Higher Ground through which they have a very lucrative and much-talked-about partnership with Netflix. The 44th US President recently moderated a half-hour Q&A on Academy's members-only streaming service discussing Crip Camp, a documentary feature on the disability rights movement produced by the Obamas, which has an Academy Award nod this year.

Podcasts
The Clintons chatted up with Oscar nominees in their podcasts

On the Clintons side, we have Bill and his wife Hillary's respective podcasts, Why Am I Telling You This? and You and Me Both. While the 42nd President chatted with Steven Garza, the breakout star in the critically-acclaimed documentary Boys State, on his podcast, Hillary hosted Stacey Abrams, producer of All In: The Fight for Democracy, on hers. Both have been picked up by Oscars.

Under the Documentary Feature category, the Academy announced a list of fifteen films: All In: The Fight for Democracy, Boys State, Collective, Crip Camp, Dick Johnson Is Dead, Gunda, MLK/FBI, The Mole Agent, My Octopus Teacher, Notturno, The Painter and the Thief, 76 Days, Time, The Truffle Hunters, and Welcome to Chechnya. These made it to the list from a solid 238 eligible entries.

Details
Some interesting tidbits about entertainment industry's most prestigious award

With 11 wins, Titanic, Ben-Hur, and The Lord of the Rings: The Return of the King are the most awarded films in Oscar history. Titanic leads the nomination chart too with 14 Academy Award nods. Coming to the biggest losers, The Turning Point released in 1977 and The Color Purple released in 1985 were nominated in 11 categories each, but didn't win any trophy.