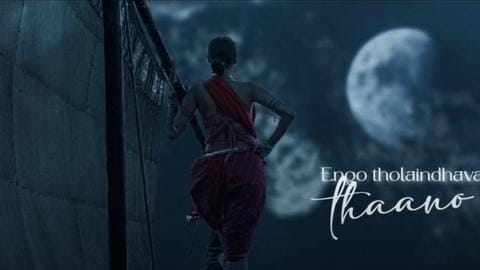 The makers of the upcoming Tamil magnum opus Ponniyin Selvan I dropped the lyrical video of the song Alaikadal (meaning "deep sea") featuring Karthi and Aishwarya Lekshmi on Monday in languages including Tamil, Malayalam, Telugu, Kannada, and Hindi. The video shows Lekshmi as the fisherwoman Poonguzhali and Karthi as Vanthiyathevan on a wooden catamaran as they are on a sea voyage.

Context
Why does this story matter?
Details
All you need to know about the 'Alaikadal' song

Academy Award winner AR Rahman has composed the background music and songs for the film. Antara Nandy has rendered her voice for the song's Tamil version, while Siva Ananth penned the lyrics. The lyrical video is a montage of stills from the song and it has some of the iconic moments of Poonguzhali and Vanthiyathevan from their important voyage in the novel.

Release
'Ponniyin Selvan I' will be released on September 30

Information
Other details to know about the franchise

Bankrolled by Ratnam's Madras Talkies and Lyca Productions jointly, it was initially planned to release PS as a standalone film. Later, the makers decided to release the film in two parts. The technical crew includes editor A Sreekar Prasad and production designer Thota Tharani. The onscreen adaptation of the novel is scripted by Ratnam along with Elango Kumaravel and B Jeyamohan.