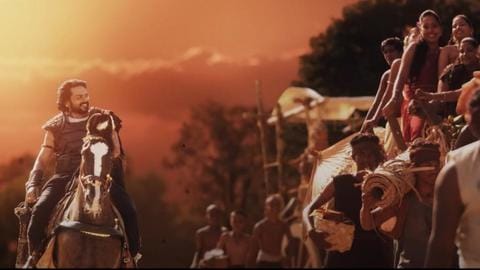 The makers of Mani Ratnam's upcoming magnum opus Ponniyin Selvan I dropped its first single at an event on Sunday in Chennai. Titled Ponni Nadhi in Tamil, it was released in several languages, including Telugu, Malayalam, Kannada, and Hindi. Speaking about the song, the film's lead actor Karthi said it took him on a ride to the Chola kingdom, adding it was "pure magic."

Context
Why does this story matter?
Quote
Here's what Karthi said about the song

After launching the song at the Chennai event, Karthi took to Twitter and wrote, "When I heard this song for the very first time, I felt as if I was riding into the Chola Kingdom! Pure magic! Join me in this journey." Ponni Nadhi which translates to "Ponni (Cauvery) River," has lyrics penned by Ilango Krishnan and was crooned and composed by AR Rahman.

When I heard this song for the very first time, I felt as if I was riding into the Chola Kingdom! Pure magic!

Join me in this journey.

Observation
What does the song show?

Ponni Nadhi features Karthi as Vallavaraiyan Vandiyadevan, a close aide of king Raja Raja Chola (played by Ravi), and the romantic interest of Kundavai (played by Trisha). The song narrates the overwhelming joy that Vandiyadevan gets after seeing the river Ponni after a long, tiring journey. The film is a fictional story based on the historical events revolving around the Cholas and their kingdom.

Details
All you need to know about 'Ponniyin Selvan I'

It was announced back in 2020 that the film will be released in two parts. The first installment will hit the theaters on September 30, 2022. Last month, the makers dropped its first teaser, which received a good response from fans. Besides the aforementioned actors, the film also features an ensemble of talented actors, including Jayaram, Prakash Raj, Sarathkumar, and Prabhu, among others.