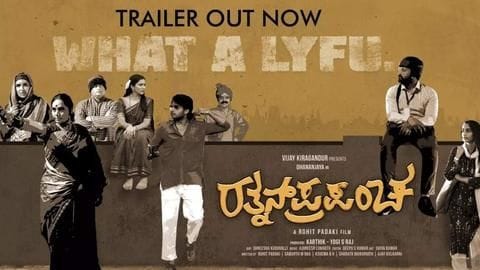 The trailer of an upcoming Kannada movie, Ratnan Prapancha, has just dropped online. Written and directed by Dayavittu Gamanisi (2017) fame Rohith Padaki, it is about Ratna's world. Although the movie trailer didn't reveal much about the plot, it introduced the main characters, who are quite a lot in number. Backed by Karthik and Yogi G Raj, it has music by Ajaneesh B Loknath.

About
What happens in the trailer?

Actor Dhananjaya appears in an interesting role of a "crabby" insurance agent, who is stuck in a 9 to 5 job. The trailer shows how his world changes when a girl walks into his life. From Bengaluru to Kashmir and then North India, Dhananjaya's Ratna is seen traveling to several places, including the world of criminals. The tone has been kept comic throughout.

Cast
Umashree as a doting mother is entertaining in the trailer

Apart from Dhananjaya, the upcoming movie also stars Reba John, Umashree, Shruthi, Pramod, Anu Prabhakar, Ravi Shankar, Vainidhi, Achyuth Kumar and Rajesh Nataranga, et al. Among all, it's Ratna's mother character, played by Umashree, whom we found quite entertaining. She portrays a typical doting mom, who speaks without any filter and is desperate to get her son married. This veteran actress overshadows others.

Going by the YouTube video, Dhananjaya's character has been scripted really well and the actor too has delivered a good performance. Naturally, it raises expectations. Fans are praising the actor, saying, "Dhananjay is showing his versatility" and "Dhananjay's script selection in recent days is just wow." And about the content, netizens wrote, "promising," "next level," "high expectations on this movie," and "A1 Kannada content."

Within seven hours, the trailer on YouTube has crossed two lakh views and 40K likes. Even big South Indian stars have shared the video and lauded the director and actors on their respective Twitter handles. Malayalam actor Dulquer Salmaan wrote, "Happy to share the #RathnanPrapanchaTrailer !! All the best you guys !!!" Kannada superstars Kichcha Sudeepa and Rakshit Shetty also appreciated the trailer clip.