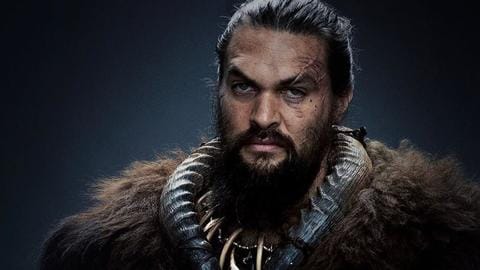 Apple TV+ has released a new trailer of See season two. Dave Bautista joins the cast as Edo Voss, estranged brother of Baba Voss (Jason Momoa). This season will see Edo finally meeting Baba, who's a warrior of the Alkenny tribe, but things between them won't be pleasant. See, set in the "brutal and primitive" world, has also been renewed for a third season.

Trailer
'The sight will return,' but at a great price

The trailer starts with the glimpse of Baba, a "fearless warrior in a world without sight," meditating in the middle of a forest. We shall witness his struggle to reunite with his daughter, Haniwa. And, Edo will make all possible efforts to make that reunion unfavorable. The trailer claims that "the sight will return" to all, but at a great price.

War
Who will win the war of sight, Baba or Edo?

See takes us to a post-apocalyptic future where everyone has lost their sight. Some are born with the ability to see, raising the hopes of others to achieve the same. Baba's Kingdom of Payan and Edo's Trivantian Republic will spark a war, as they try to get the "gift of vision." Edo's soldiers will "fight to enslave," whereas, Baba's soldiers will "fight for freedom."

Makers
Some new and some old faces join future of 'See'

Will Baba lose the war started against Edo? Because, in the trailer, he's seen held captive by his not-so-benevolent brother. The nearly 3-minute-long video beautifully includes The Rolling Stones' song Goodbye, Ruby Tuesday, written by Mick Jagger and Keith Richards. Momoa has already finished See season three filming, but before that, catch him on the second season on August 27, 2021, on Apple TV+.