'Army of the Dead' 15-minute review: A true cinematic masterpiece

Zack Snyder is back, and how! The ace director returns to the zombie genre after his directorial debut Dawn of the Dead in 2004. Thanks to Netflix, fans finally got a taste of what they can expect from his upcoming movie Army of the Dead. We watched the first 15 minutes via a live event on Netflix's YouTube channel, and here's our review.

Teaser
Snyder builds up the tension with an interactive video

Synder and Dave Bautista introduce us to an 'interactive' video, where fans had to flood the comments section with emojis to 'unlock the first 15 minutes.' This game feels like a drag at times, but if you're a Snyder fan, you could argue it builds up the tension perfectly. After 25 long minutes, we are finally ready to meet the army of the dead.

Information
The killer zombie is finally on the loose! 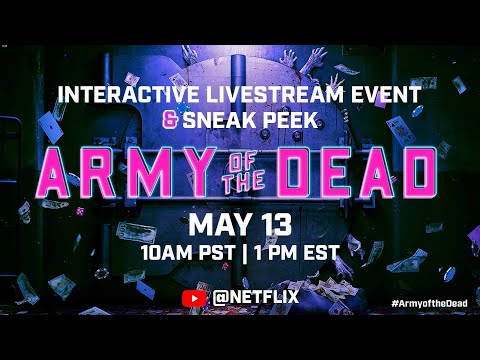 It starts off like any regular movie with a couple celebrating their marriage, taking pictures, et al. But there's also a secret convoy from Area 51, surrounded by soldiers. That's never a good sign. The container cracks open after an accident, and we are introduced to our first zombie. Let me tell you something — you have NEVER seen a zombie like that before!

Introduction
You don't want to mess with this army of dead

This is a buffed-up zombie, who looks like he's been hitting the gym. He can dodge bullets, so pretty intelligent as well. Snyder masterfully captures a shot of the undead climbing a hill showing us their next destination, Las Vegas. The Army of the Dead is heading to the City of Sin and within no time, Las Vegas is taken over by the undead.

Brilliance
What happens in Vegas, stays in Vegas...Or does it?

Here's when we are introduced to our mercenaries, led by Bautista. Snyder manages to add a beautiful montage of shots as Viva Las Vegas plays in the background. You see families getting devoured, friends killing each other, it's an absolute carnage. Adding the Snyder touch to it, this entire bloodbath is captured without a single dialogue. Just sheer brilliance from the master filmmaker!

Army of the Dead, also starring Huma Qureshi, Ella Purnell, Ana de la Reguera, and Omari Hardwick is a movie that could potentially redefine the zombie genre. Zombie fans, it's a 'no-brainer' — you don't want to miss this Zack Snyder flick at any cost. It is coming to Netflix on May 21. Final Verdict: 4 out of 5 stars (so far).