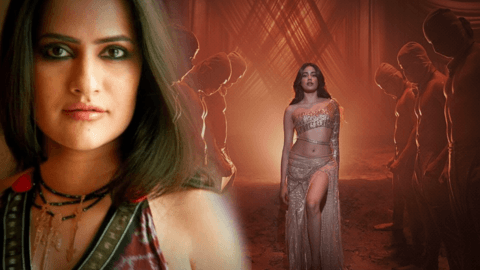 Singer Sona Mohapatra has slammed the remix culture of Bollywood by berating the latest remix on the block Nadiyon Paar from the upcoming movie Roohi. The song is the remix of the famous 2008 track Let the Music Play by singer Shamur. The latest version features actress Janhvi Kapoor and has received over 13 million views since it released yesterday.

Quote
Mohapatra was furious at 'sorry saga of remixing songs'

Mohapatra wasn't pleased with the remix and tweeted, "The sorry saga of remixing songs in Bollywood continues, the message that they put out is clear - we have no need or respect for original creators, creation, music composers, lyricists even singers. (sic)" She also said that such moves show that the makers have no confidence, spine or guts to support new talent.

Statement
'There is lack of faith in new creation in Bollywood'

Commenting on makers who don't promote new talent, Mohapatra added, "The last decade has seen the worst of this state of fear & lack of faith in the creation of new Music in Bollywood. (sic)" She, however, praised the rare few exceptions "who continue to believe in our unique legacy of cinematic musicals, where the language of music was so key in taking forward narratives."

The original song had been composed by Emanuele Marascia and Alessandro while the remix version is the brainchild of Sachin-Jigar. Shamur's vocals from the original are joined by Jigar Saraiya, IP Singh, and Rashmeet Kaur in Nadiyon Paar. The newly added lyrics have been written by IP Singh and Jigar Saraiya. Sachin-Jigar said the new track "absorbs the elements" of the original.

"Let the Music Play is a cult tune, and the opportunity to present this song to a new generation was irresistible! Nadiyon Paar absorbs elements that made the original so special and sprinkles a bit of Roohi's magic, to bring that extra tadka," they said.

Roohi is looking to end the lull at the movies that came with the pandemic last year. It will be the first big-budget film to release since the theaters were allowed to function in full capacity. The film stars Rajkummar Rao and Varun Sharma alongside Kapoor in pivotal roles. It is a part of Dinesh Vijan's horror-comedy universe, after Stree.