'The Last Duel' trailer shows 14th century's 'Me Too' story 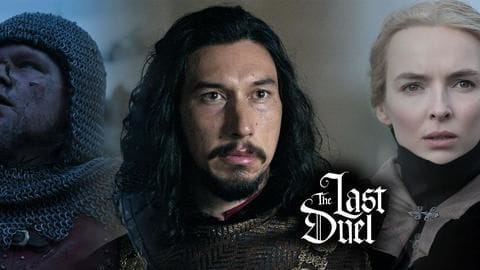 Trailer of director Ridley Scott's The Last Duel has been released and it stars Adam Driver, Jodie Comer, Ben Affleck and Matt Damon in lead roles. Set against the backdrop of 14th century, the story is based on France's last sanctioned duel. Backed by 20th Century Studios, the film is set to hit theaters in the United States on October 15 this year.

About
Men will decide whether a woman is honest or not

In the trailer, Jacques Le Gris (Driver) meets up with his friend Jean de Carrouges (Damon), a knight and his wife Marguerite (Comer). Soon we see Marguerite accusing Gris of sexual assault. Nobody believes her, but she still fights for justice. Amid all this, the men decide to duel it out. Affleck stars as Count Pierre d'Alencon, the "reigning grand poobah" of the region.

Theme
An old tale where Marguerite held the 'Me Too' movement

The film is based on true events, which means Marguerite was a real woman, who bravely fought for justice. A #MeToo movement held by her led to a duel where two men decide whether she's honest or should be punished for false accusation. "The truth does not matter. There is only the power of men," a voice in the trailer explains the real deal.

By the way, who all noticed the funny hairdos of Affleck and Damon? Was 14th century France like that? Whatever be it, seeing the two together after Good Will Hunting was a pleasure. Notably, the 1997 movie was written by both of them, for which they even won an Oscar. They return as screenwriters for The Last Duel too, along with Nicole Holofcener.

Information
Eric Jager's book has served as the base material

They have taken inspiration from the book The Last Duel: A True Story of Crime, Scandal, and Trial by Combat in Medieval France by Eric Jager. But will they be able to recreate the magic left by the Gus Van Sant-directorial? Let's wait!

Reaction
Netizens give a thumbs up to the trailer

With a stellar cast, strong acting performances and a perfect set, The Last Duel looks promising. Ever since the trailer has released, netizens are showering love and are eagerly waiting for the movie to hit the screens. While a user called it a "historical epic," another praised Comer's performance. And many fans are excited to see Damon in a movie with such talented actors.