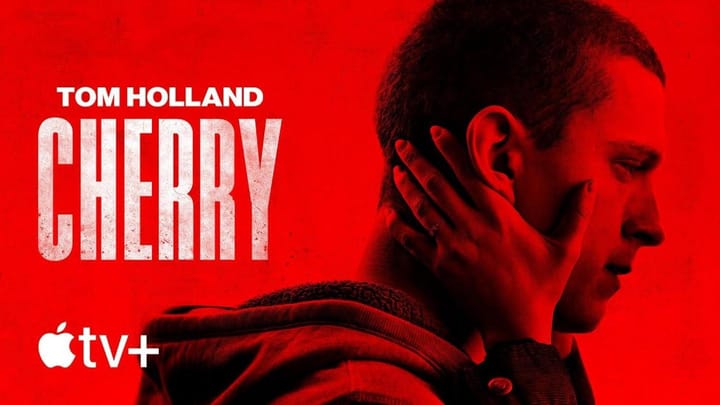 It seems that three of the most recognized figures of the Marvel Cinematic Universe—the Russo brothers and Tom Holland—want to break their preset images. Cherry, their latest venture, has recently released its first official trailer and it does exactly that. The film is based on opioid addiction and pictures Holland as a struggling youngster dominated by drug abuse. Let's dive in.

The start: A dollar bill reads, 'I have a gun'

"Sometimes I feel like I've already seen everything that's gonna happen... and it's a nightmare," Holland's role of Cherry keeps repeating this sentence throughout the trailer that unfolds different implications. The trailer had me in its first sequence, where Cherry slips a dollar bill over a bank desk counter and flips it for the banker to correctly read, "I have a gun."

To explain better, Cherry flips it again correctly, with the other side of the dollar bill mentioning, "This is a robbery." The defused state of the banker, quietly passing on money to an alarmed Cherry, gives us a hint of the violence and psychological struggle that's about to follow. Cherry recalls the first time he met his ladylove Emily, played by Ciara Bravo.

Violence, addiction hit him; Emily calms 'noise' in his head

We get to see his brief stint in the army, where Cherry struggles to cope with violence. He, however, has Emily by his side throughout his struggle, calming him down when he freaks out about the "noise" in his head. Notably, the opioid crisis shown in the film stems from the Russo brothers' experiences as they have lost several close people to opioid addiction.

Joe explains how opioid, a cheap drug, destroys a person

In a Variety interview, Joe explained the imminent dangers of opioid drugs, which are really cheap but can cripple the user acutely if they don't find a process of deaddiction. To portray such a difficult character having so many ups and downs in his life, and bring the multitude of shades of the story to the fore, Holland seemed like an apt choice for them.

'Tom is playing a character who makes some self-destructive choices'

"Tom is playing a character who makes some self-destructive choices, but he's so charismatic and likeable," Joe explained. The other half of the duo, Anthony, added, "Very early on, I don't even know that Joe and I wanted to commit to doing the movie at all until we thought of Tom in the role. He's such an appealing actor, and so good."