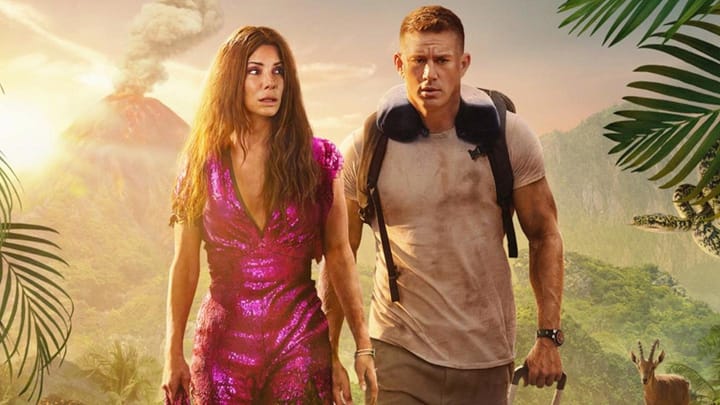 Paramount Pictures is bringing together epic names like Sandra Bullock, Channing Tatum, and Daniel Radcliffe for an epic, hilarious ride through the jungle. Titled, The Lost City, the action-packed adventure recently received its trailer and we are hooked. Apart from Bullock and Tatum's refreshing chemistry, the teaser clip offers a significant dose of comedy, disaster, and a hint of romance. Here's a trailer breakdown.

Loretta Sage (Bullock) is a homebody whose career has been built on her series of romance-adventure tales with Alan (Tatum) serving as the cover model. Things turn difficult when "an eccentric billionaire" (Radcliffe) kidnaps Sage during her book tour, believing she can find him the lost city she wrote about in the book. Alan, to prove he's a real-life hero, comes to her rescue.

This entire plot is more or less summarized in the trailer. What works for the venture, apart from its A-class cast, is the element of ridiculous which the makers have graciously added. For example, Brad Pitt (in an extended cameo) swirls his long blonde hair while saving Sage from a war zone in slo-mo. All this while DNCE's Cake by the Ocean plays. Hilarious!

Movie will release in theaters next March

Earlier, Ryan Reynolds, who made the evergreen Proposal with Bullock, was said to be the male lead in this one. And, by the brand of humor displayed in the trailer, we can see him fitting well. Also, the adventure-comedy theme does remind us of Reynolds's Red Notice co-star Dwayne Johnson. Let's see what the new faces bring when the film comes out next March.

Happy birthday, Sandra Bullock! Looking at actor's noteworthy performances Netflix
Top 5 fashion movies we got from Hollywood Hollywood
When is 'The Lost City' hitting the theaters in India? Hollywood
5 Hollywood stars who are successful restaurant owners as well Mark Wahlberg