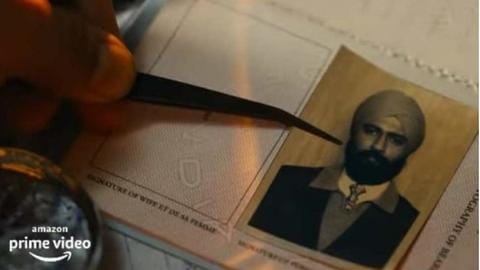 In line with the previous announcement, Vicky Kaushal's Sardar Udham is coming to Amazon Prime Video next month. The streamer unveiled today that the biopic on freedom fighter Sardar Udham Singh will be launched on October 16. Makers also released a teaser while making the announcement. Helmed by Shoojit Sircar, the movie has been produced by Rising Sun Films in collaboration with Kino Works.

The date was announced on Bhagat Singh's birth anniversary

Kaushal did the honors of announcing the premiere date today to mark the birth anniversary of Sardar Udham Singh's "ally" Bhagat Singh. He said, "On the birth anniversary of Shaheed Bhagat Singh, I'm proud to bring to you the story of his ally- Sardar Udham Singh- one man, many aliases, one mission." The teaser gave us a glimpse into his said "many aliases."

The nearly one-minute clip is sans any dialogue and features a person's hands fixing multiple passports. We understand these are fake, given the use of ink-remover. Only one of the passports carries the name "Udham Singh" and the person also pastes a passport size picture of Kaushal as Singh. The sound of a gunshot might have been reflective of the assassination that took place.

Check out the clip here

It will recall the assassination of Michael O'Dwyer

For the unversed, Singh was a revolutionary who had assassinated Michael O'Dwyer, the former Lieutenant Governor of Punjab in British India, in London in 1940. Notably, it was O'Dwyer who had ordered the 1919 Jallianwala Bagh massacre. The massacre had deeply impacted young Singh, who decided to avenge the bloodbath. Prime Video has described the movie as a "heart-wrenching story of retribution."

Kaushal has 'Ashwatthama', 'Mr. Lele', and others in his kitty

Earlier, Vijay Subramaniam, Director and Head, Content, Amazon Prime Video, India, had said, "Sardar Udham [is] a stirring story of courage, fortitude, and fearlessness, from the buried treasures of our history and culture." It co-stars Banita Sandhu and Amol Parashar. Kaushal currently has multiple movies in his kitty. The list includes Ashwatthama, an untitled Yash Raj Films movie opposite Manushi Chillar, and Mr. Lele.

These 5 Bollywood couples are tying the knot soon

Katrina Kaif, Vicky Kaushal's wedding: What we know so far

Five things to know about the real Sardar Udham Singh

Happy Birthday, Vicky Kaushal! The star of many biopics