SpaceX competitor Virgin Galactic has unveiled the VSS Imagine, the latest in its fleet of spacecraft primarily designed for commercial tourism. The next-generation vehicle is a part of the SpaceShip class suborbital vehicles designed for quicker reuse compared to the outgoing SpaceShipTwo which is also named VSS Unity. There are no functional differences between the Imagine and the Unity, apart from its modular design.

VSS Inspire designed to be modular and easy to maintain 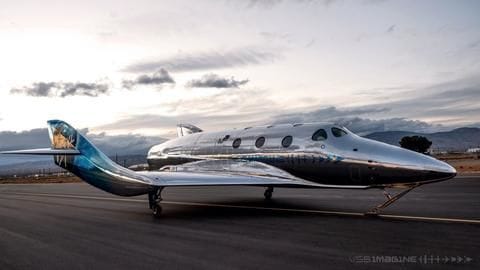 The modularity of the new all-chrome VSS Imagine is particularly tailored to facilitate Virgin's space tourism business slated to go operational in 2022. This will reduce the cost and time needed between flights and also make the spacecraft easier to maintain and upgrade. The new design allows Virgin Galactic engineers to pull off panels and work on areas that weren't easily accessible earlier.

Next Virgin Galactic spacecraft iteration will focus on mass production

Apart from the minor cosmetic differences, the engineers have managed to shave off some weight compared to the SpaceShipTwo. The cabin interiors also look slightly different, but that's a function of the modular design that splits the fuselage, cabin, wing, and tail booms for ease of replacement. The next step in Virgin Galactic's spacecraft evolution will focus on making them viable for mass production.

VSS Imagine will go through first test flight in May

The VSS Imagine is poised to go through its first glide test sometime in May from the company's Spaceport America launch facility in New Mexico. The unpowered test flight involves dropping the vehicle from a carrier plane to test its capability to glide safely. The test was delayed after the previous powered test attempt in December was aborted mid-flight due to electromagnetic interference.

The VSS imagine is the third space vehicle built by Virgin Galactic, with the Unity being the second one. The first one dubbed VSS Enterprise was destroyed in a tragic test flight where the co-pilot lost his life. The next iteration will be called VSS Inspire, which the company is manufacturing now. The primary focus involves optimizing production to allow for manufacturing at scale.