Here's how you can watch 2021's first annular solar eclipse

A solar eclipse is set to occur during the second half of the day today. This will be the first solar eclipse of the year. Reports suggest that the "Ring of Fire" will be visible from some parts of India as an annular eclipse, when the Moon will block the sunlight and cast a shadow over Earth. Here are more interesting details.

Called "surya grahan" in Hindi, the eclipse commenced at 12:25 pm today. According to a map published by NASA, the event will be visible from Ladakh and Arunachal Pradesh in India. It will take place at 1:42 pm and last until 6:41 pm in most regions. The Ring of Fire is expected to be visible for approximately three minutes and 51 seconds.

Do you know?
Annular eclipses are a rare phenomenon

Notably, annular eclipses are rare occurrences and are a must-watch. NASA says that annular eclipses appear once every 18 months somewhere on Earth, but are visible for just a few minutes. A report suggests that in 2022, there will only be two partial solar eclipses.

Watch in comfort
What is an annular eclipse and 'Ring of Fire'?

During an annular eclipse, the Moon is far enough away from the Earth to appear smaller than the Sun, which obscures most of it except a ring on the outer periphery. NASA will live-stream the event on YouTube. An annular eclipse may only be a partial eclipse in some parts of the world. People there won't be able to witness the "Ring of Fire". 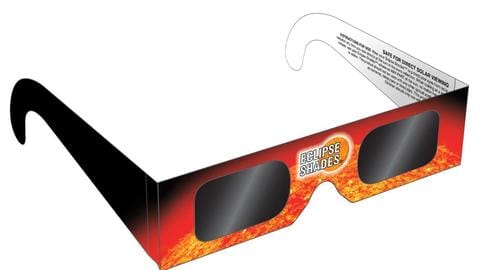 We strongly urge you to view the event while taking the appropriate precautions such as using specialized solar eclipse-viewing glasses. Ordinary sunglasses won't do. You can also build a pinhole projector to view the eclipse. To photograph the event safely without damaging your camera equipment, attach the appropriate solar filter to your lens. Such filters are available for binoculars and telescopes as well.

Details
Viewers across northern hemisphere will witness a partial eclipse

NASA's interactive map depicts that the annular solar eclipse will be clearly visible only from Ladakh and Arunachal Pradesh in India. Viewers located in the eastern United States, northern Alaska, Canada, parts of the Caribbean, Europe, Asia, and northern Africa will witness only a partial solar eclipse. NASA claims that the eclipse will be visible in these regions shortly before, during, or after sunrise.