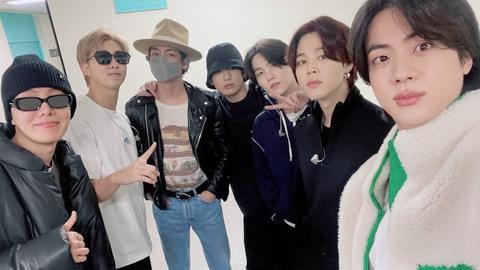 Global pop sensation BTS delighted their fans with the teaser for their upcoming song Yet to Come on Tuesday. The song will feature in their anthology album titled Proof. An amalgamation of new and old tracks, the album will also feature Run BTS and For Youth. It's premiering on Friday. The teaser brought in 97 lakh views within 13 hours of its release.

Context
Why does this story matter?
Teaser
The song has been shot in a captivating, picturesque location

The 36-second-long teaser doesn't give much away, but it is hard to take your eyes off the scenic beauty of the desert it has been filmed in. While Jeon Jungkook seems to be brooding over something while sitting in this dreamy land, Kim Taehyung (V) dons a suit with a red rose in hand. Toward the end, we also hear Jungkook's vocals, albeit briefly.

Reactions
Fans are going gaga over the teaser

The teaser has been dominating social media with Jungkook trending with 1.26M tweets and #YetToComeMvTeaser1 with 866K tweets. Numerous fans shared their excitement on YouTube. One fan said, "I am sure Proof would be insanely cool," while another one wrote, "Yet to Come is gonna just rock the whole world!" Admirers are also going gaga over the singers. One said, "MUSICAL PRODIGY JUNGKOOK! (sic)."

Promotion
BTS will be performing the song on music shows

The song's complete title is Yet to Come (The Most Beautiful Moment). One of the three new releases from Proof, Yet to Come also marks BTS' return to Korean music shows. This will be their first music show promotion in the past two years. Having started their journey on June 13, 2013, June 2022 also signifies the ninth year of the popular music group.